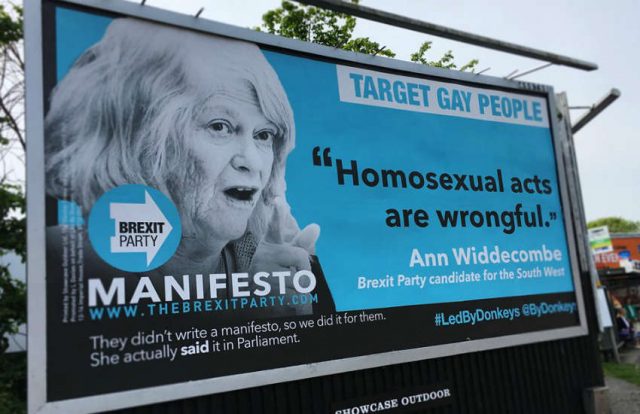 Anti-Brexit campaigners said they will take down a billboard which featured a homophobic quote.

Led By Donkeys put up a billboard in Christchurch, Dorset, featuring a quote by former MP Ann Widdecombe. She is currently running to be a Member of the European Parliament for The Brexit Party.

In bold letters, the quote says: ‘Homosexual acts are wrongful.’

Underneath it states: ‘They didn’t write a manifesto, so we did it for them. She actually said it in Parliament.’

However, after a backlash from members of the LGBTI community, the group have issued and apology and promised to take it down.

In a statement on Twitter, they said: ‘We’ve been getting some justified criticism today on social media for posting a billboard of Ann Widdecombe’s homophobic views.

‘So we’re taking the billboard down and deleting the tweet. Just because we’re outraged by her views it doesn’t mean everyone will be, and more importantly there will be some who’ll take her words at face value.

‘If it’s causing pain and anger to those directly affected by homophobia it’s totally counterproductive.

‘Really sorry everyone, we fucked that one up.’

The response to their decision is mostly positive, with many commending the group for apologizing. One user said: ‘”Sorry everyone, we fucked that one up” – very refreshing to hear in today’s politics.’

Another said: ‘I understand why you’ve done it, but I wish people would be more upfront about the reality of her views – and those like hers.

‘She is the past. We cannot let her dictate our future.’

The Brexit Party is predicted to receive a third of the votes despite not having released a manifesto.

In its place, Led By Donkeys has been using the words of the people running for the European Parliament against them.

Ann Widdecombe, as an MP from 1987 until 2010, voted against LGBTI rights at every opportunity. This includes the repeal of Section 28, the Equality Act, same-sex adoption, civil partnerships and equaling the age of consent.

They’ve also pointed out that Nigel Farage has advocated for less maternity pay. Also, he has promoted an insurance-based healthcare system.

If The Brexit Party wins in the European election on 23 May 2019, this will give them political momentum for any upcoming general election in the UK.