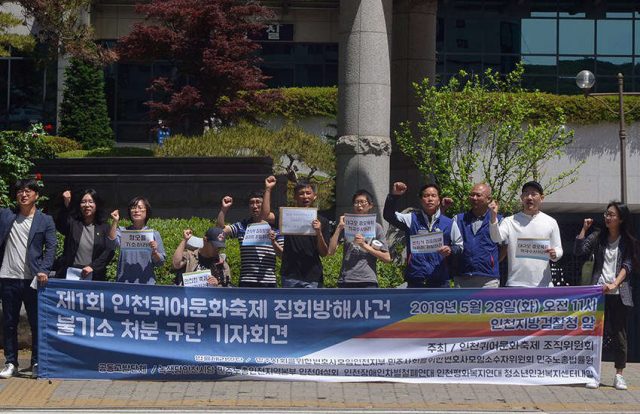 Authorities in South Korea have announced they will not be charging anyone over violence at a LGBT pride event last year.

Organizers and witnesses of the Incheon Queer Culture Festival (IQCF) say about 1,000 anti-LGBTI and Christian demonstrators verbally and physically abused attendees of a march in September.

Government prosecutors, however, said there was a ‘lack of evidence’ and that they ‘cannot prove the relation between violence and [homophobic] organisations’, according to local journalists.

On Tuesday (28 May) IQCF organizers said police had shown ‘an extreme level of incompetence’ in failing to bring people to account.

‘This is tantamount to supporting the perpetrators and assisting them to repeat the violence’ organizers said.

‘The first Incheon Queer Culture Festival was the scene of mass hate violence that left great trauma on sexual minorities and their allies, clearly showing how deeply entrenched the hatred and violence was in theIncheon area’.

‘There are many victims, but no official assailant has been found’.

Local journalist, Raphael Rashid, who attended the pride said ‘police handling of the violence was completely inadequate on the day’.

He said he witnessed a young man being beaten by protesters as police did nothing.

They also appear to grab flags, banners, and even attendees. A lot of young LGBTI South Koreans attended the pride event. They were visibly shaken by the incident.

Protesters delayed the pride parade and forced organizers to cancel other planned events.

Police booked eight people involved but did not detain them. Organizers accused the police of failing to stop the violence.

Rashid suggested pursuing the case would be ‘problematic’ for authorities.

‘It would expose the police to serious mishandling and inaction, who underestimated the violence homophobic groups are willing to use’ he said.

‘It would also suggest to the “Christian” lobby that authorities are siding with queer festival, which in their eyes would mean they are endorsing homosexuality’ he also told Gay Star News.

In its 2019 world report, HRW said leaders had done little to protect the rights of LGBTI people in .

The rights group noted 210,000 people had signed a petition against a pride parade in the capital, Seoul. also blocked a pride festival in .

Organizers of the this month urged the not to give in to conservative groups and protect attendees.

Pride events in Korea are increasingly under attack from conservative Christians. The groups pressure authorities to deny permission and violently disrupt activities.

The National Human Rights Commission claimed it not ‘