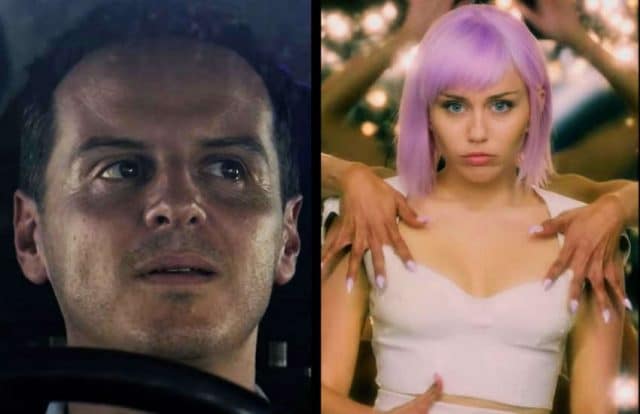 Miley Cyrus and Andrew Scott are, in fact, among the protagonists of the new season of the beloved British show created by Charlie Brooker.

Black Mirror 5 will drop on Netflix on 5 June, five months after its last interactive episode Bandersnatch.

The pansexual singer and actress stars as Ashley O, an incredibly famous, lilac-haired popstar. Ashley is launching her own series of virtual assistant gadgets, Ashley Too.

As the trailer shows, the episode seems to deal with the AI gone bad trope, with Ashley Too showing a foul-mouthed, sassy personality.

Scott stars as an Uber driver taking someone who works for a company called Smithereen hostage. But what does Smithereen do?

Finally, the first episode of the new season stars Avengers actor Anthony Mackie as a husband whose wife is trying to get pregnant.

However, Mackie’s character doesn’t seem too thrilled at the idea of having a baby. And what’s worse, his wife suspects he might be cheating on her.

The Netflix show boasts good LGBTI representation. Its most popular episode is San Junipero, centered on same-sex couple Yorkie and Kelly in the 1980s.