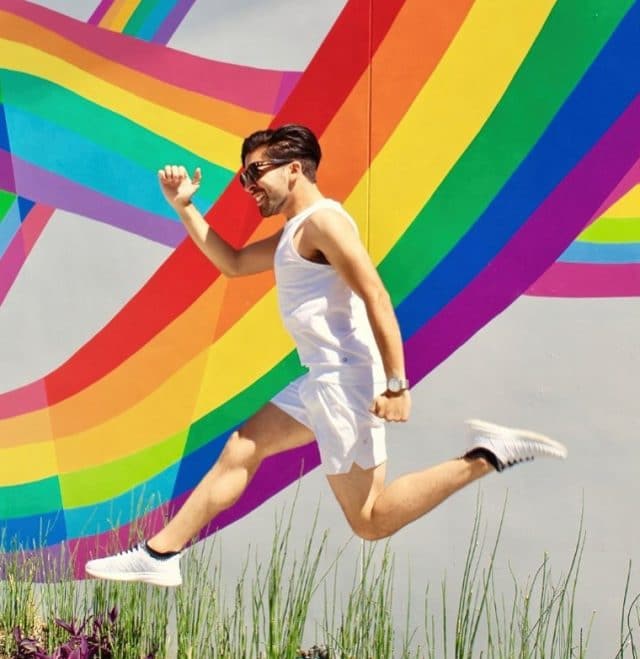 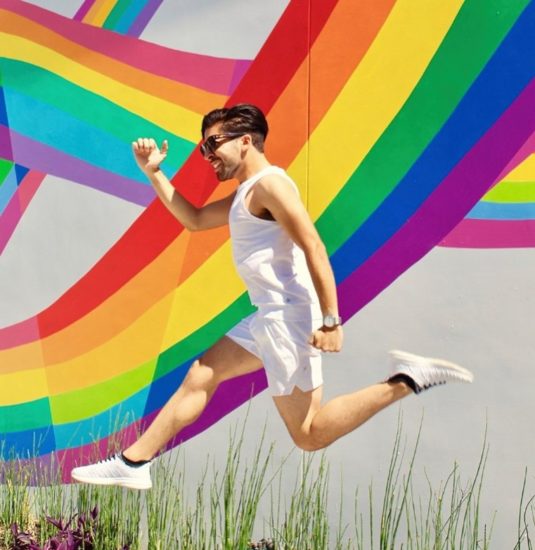 Pride season is in full bloom, with rainbows appearing on walls and crosswalks and even the parking lot behind the Lululemon in West Hollywood (photo above). And we have not even gotten to the socks, t-shirt and underwear yet.

To celebrate Stonewall 50 around the world, we’ve collected some favorite rainbow-themed selfie spots, perfect for popping a pic and letting the world know how you are celebrating your pride.

Artists with the organization Color Bham, in Birmingham, Ala., brought a big dose of bright happy pride to the city this year, when they painted a 500 foot stretch of wall with rainbow colors. The Rainbow Wall by the railroad tracks off Morris Avenue, between 22nd Street and 20th Street North. Play the video to see how big 500 feet of wall is.

The Rainbow Crosswalks loop around all four corners at Piedmont and 10th in Atlanta. Be careful when posing for a selfie—watch for traffic!

This Trans Pride crosswalk was installed in 2019 in Boystown, at the intersection of Halsted St. and Melrose St.. There are also 13 rainbow crosswalks on Halsted St., and don’t forget Halsted’s pylons, known as the “rainbow rocket ships.”

These doors are at the Castro Castle, at Church St. and 17th. The Castro Castle was once a bed and breakfast inn, and it became a hotspot for supporters for medical marijuana, but it has now closed. Hopefully when it reopens, these famous “rainbow curtains” will be kept.

Take a stroll down the DC Alley Museum, in Blagden Alley-Naylor Court Historic District. Pause for a moment to enjoy these doors, which spell the word “LOVE.”

This stunning art installation is at the passenger platform in the Stadion Subway Station. The rainbow motif was created to celebrate the Olympics, but it is so beautiful, why not use it to celebrate Pride anyway?

Hurry up and see this mural at 2319 South Granville St., before the building is demolished and condos are built in its place.

The rainbow crosswalk in Greenwich Village is looking a little rough, due to normal wear and tear of being on a busy street. But this crosswalk leads to the historic Stonewall Inn, the site of the infamous police raids, continuous harassment, and beatings of gay and trans patrons that inspired a series of riots. Thousands of civilians fought the police, the bar was destroyed (by the police, as revenge) and many people were hospitalized. Walk on the rainbow crosswalk here, and walk on a sad, but also inspiring, moment of history.