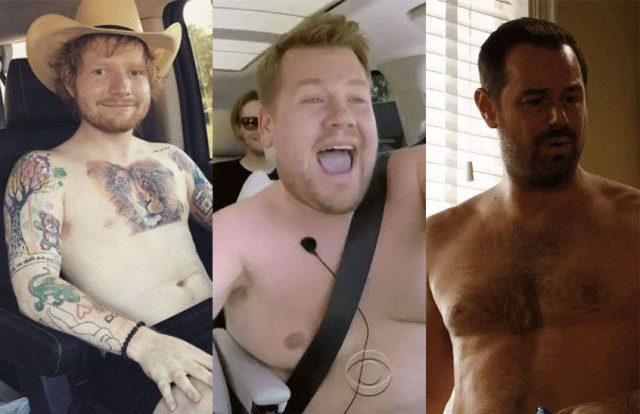 The top 10 most relatable celebrity male bodies, according to a poll of over 1,000 UK men, has been revealed.

It includes Ed Sheeran, James Corden and Danny Dyer as the top three.

Superstar singer Ed, known for hits like Sing and Shape of You, was voted in first place.

He was closely followed by actor and TV personality James, known for The Late Late Show and his Carpool Karaoke skit.

Danny came in third; he is known for his current role on British soap EastEnders. Animated character Homer Simpson also appeared in the top 10.

The study of 1,005 British men also found that the 10 most-seen male attributes in the media are ‘six packs’, ‘sculpted arms’ and ‘perfect features’.

Meanwhile, the three attributes in men’s bodies that respondents want to see more of in the media were ‘less ripped’, ‘rounded stomach’ and ‘love handles’.

Over half said that classical art and sculptures like Michelangelo’s David portray an unrealistic male physique for modern men’s bodies. A third said they feel pressure to look a certain way.

The study, which questioned men of all ages over 16, was conducted by Markettiers on behalf of lager brand Fosters.

Some may be surprised by the lack of ethnic diversity in the list.

GSN has contacted the marketeers to find out if the longer list featured people of colour or transgendered celebrities, and are awaiting further comment.

Responding to the study, gay plus-size model told Gay Star News: ‘I see men relating to these body types. They are more realistic to what most men look like these days, and that’s OK.’

He furthermore added: ‘We are all shaped differently and we look to media representation to who we can compare ourselves to sometimes. Someone that looks like me, being visible in media is positive and tells us all that it’s OK to look how you look especially if you’re happy.’