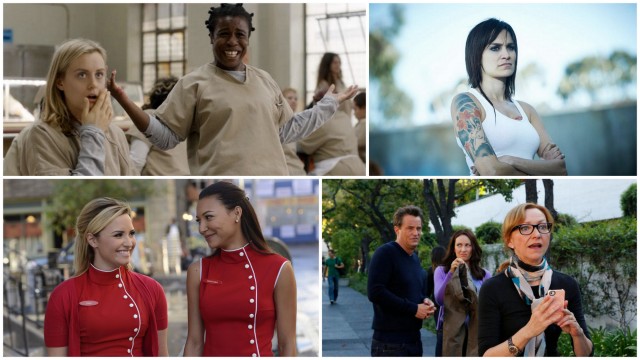 Winner of the Palme d’Or at the Cannes Film Festival, this sensuous piece of orgasmic cinema will not let you down. Directed by Abdellatif Kechiche, the movie stars the amazing Adèle Exarchopoulos as Adèle, a young woman whose life is changed forever when she meets blue-haired Emma (Léa Seydoux) with whom she will discover desire, lust, and love. A powerful film with powerful performances.

Set in Tehran, Iran, this film portrays young blossoming love between two girls in a positive, fun, beautiful way. Of course, Atafeh (Nikohl Boosheri) and Shireen (Sarah Kazemy) will need to overcome many obstacles in a country where oppression and prejudice reign supreme. Maryam Keshavarz’s movie won the Audience Award at the Sundance Film Festival and the Best Feature Awards at both the New York and Paris Gay and Lesbian Film Festivals.

Winner of the Reel Pride Film Festival Audience Award, Nicole Conn wrote and directed this beautiful feature that tells the story of author Elena (the gorgeous Necar Zadegan), who is married to a pastor and meets lesbian photographer Peyton (the equally seductive Traci Dinwiddie). The chemistry is undeniable and, unable to resist their mutual attraction, the women engage in an affair that will lead to… Well, you’ll see. The film also boasts the longest kiss in movie history. Believe me, it is nothing short of Wow!

Based on a novel by the same name, this romantic drama, directed by Shamim Sarif, is the story of Tala (the beautiful and talented Canadian-born Lisa Ray), a Jordanian woman of Palestinian descent, living in London, who is set to marry her fourth fiancé… when she meets British Indian goddess Leyla (played by the amazing Sheetal Sheth) and the two fall in love, with the help of Leyla’s sister who pushes them to get together. A great, feel-good movie with snappy, smart, sometimes funny dialogue.

This Swedish romantic drama directed by Alexandra-Therese Keining tells the story of Mia and Frida, two women in their thirties, who meet under peculiar circumstances: Mia’s father is about to marry Frida’s mother. When the future stepsisters find themselves attracted to each other, the families are sent into a tailspin. Beautiful, sensual moments are a pleasant bonus in this film, which was titled With Every Heartbeat when it was released world-wide.

Directed by the amazing Canadian filmmaker Léa Pool (The Blue Butterfly, Pink Ribbons, inc.), this gritty, coming-of-age movie, set in a posh boarding school, stars Mischa Barton as a teenage girl who discovers her two senior roommates (played by Piper Perabo and Jessica Paré) are lovers. You will also catch Emily VanCamp (Brothers and Sisters and Revenge) in one of her first roles. This is a masterfully told story based on the Susan Swan novel, scripted by playwright Judith Thompson.

This controversial Katherine Brooks film about the forbidden love between a teacher (Outstanding Actress Award-winner Diana Gaidry at the Los Angeles Outfest for this movie) and the troublesome student who pursues her (the magnetic Annabelle from the title, played by the beautiful and powerful Erin Kelly) will have you glued to the screen. Phenomenally sensual, the movie will have you rooting for the characters… or shouting at them! One thing is for sure, you won’t be indifferent.

This powerful, gritty Dee Rees flick is the story of Alike (the excellent Adepero Oduye), a lesbian teenager in Brooklyn, navigating life, friendship, family and heartbreak, all the while trying to find herself (and love) through sexual expression. It is so great to see a lesbian character drive a movie in an African-American community. No wonder this film garnered plenty of awards. It is groundbreaking and all-around great.

Based on a true love story, the tragic affair that blossomed between American poet Elizabeth Bishop (played by the amazing Miranda Otto) and Brazilian architect Lota de Macedo Soares (the commanding Gloria Pires), this movie is fabulous. The acting is top-notch, the cinematography is breath-taking, and the story is heart-wrenching and awe-inspiring. A great movie where Out of Africa meets Frida meets Eat Pray Love.

The year before she made I Can’t Think Straight, filmmaker Shamim Sarif adapted her own novel and brought together Lisa Ray and Sheetal Sheth on screen as Miriam and Amina, two women who fall in love in South Africa during apartheid. This film is poignant, breathless, and really illustrates not only the racial divide but also the taboo surrounding same-sex relationships in a country torn by bigotry, machoism and hatred. How these women can exude so much love and passion within is truly amazing.