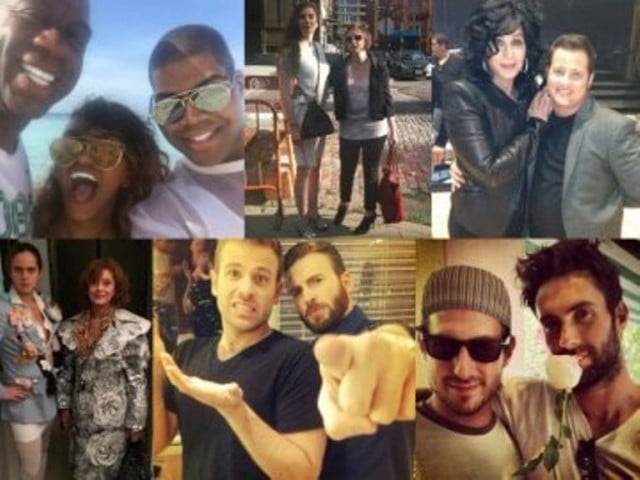 The role of the family is to give support, to love unconditionally and to help. Sadly, for LGBT people, sometimes family means rejection and shame.

It’s not the case of these families. These LGBT people are loved by their famous sibilings/parents!

Chez Bono Is the son of famous Cher. In 2009, Chez Bono decided to undergo transition from woman to man and his awesome mom was totally supportive.

“Chaz is embarking on a difficult journey, but one that I will
support. I respect the courage it takes to go through this transitionin the glare of public scrutiny, and although I may not understand, I will strive to be understanding. The one thing that will never change is my abiding love for my child,” Cher explained.

Farrell’s brother, Eamon is gay and has full support from his famous brother. The actor said that he would like to be Eamon’s best man at his wedding, highlighting that he supports gay marriage.

Cyndi Lauper’s sister is a lesbian and she is lucky to have such a great member family on her side. Cyndi has always been supportive with the LGBT community and keeps on being.

8. Lena Dunham wished she was gay, instead her sister is

The Girls creator, Lena Dunham thinks that marriage should be a celebration for everyone, not only for straight people and she will not get married until her lesbian sister will have the same legal right. Grace, Lena’s sister came out at the age of 17 and Lena was quite happy to hear that a member of her family was gay. She wish she had been too, so she declared!

“I have always felt a strong and emotional connection to members of the LGBTQ community. It was actually a huge disappointment for me, when I came of age and realized that I was sexually attracted to men. So when my sister came out, I thought, Thank God, someone in this family can truly represent my passions and beliefs.”

7. Adam Levine supported his gay brother, Michael from the beginning

When his brother came out, Adam and his family offered comfort to Michael, letting him know that he’s accepted. Adam thinks that parents should accept a gay child from the beginning, otherwise it’s a continuous struggle and the more the parents fight, the more the kid’s going to be fucked up.

Sally Field is known to be a great person and a great actress. Furthermore, she’s a great mom. She supports her gay son Sam Greisman and she frequently speaks for the LGBT community. She is terrified by parents who don’t accept their gay children and has a message for them.

“Don’t put your own prejudices or fears about sexuality on your children.”

She thinks that any for of sexuality is “a human glorious part of existence” and nature tells you who to be.

Her son wears long hair and dresses and he doesn’t care about gender roles, he is just who he is and Susan accepts and supports her son.

The more colors, the better!

“I think the more crayons you have in your box to color outside the lines, the more exciting it is,” Susan said regarding her son’s style.

4. Ariana Grande has a big gay brother whom she loves so much

Frankie Grande is Ariana’s big brother and he is gay. As a little girl, Ariana looked up to her bigger brother and when Frankie came out she gave up the Catholic Church she was part after hearing their opinion about homosexuality.  “When my brother was told that God didn’t love him I was like, ‘OK, that’s not cool,’” Grande recalled to The Independent.

Even before coming out, EJ had full support from his family. We are here to support you. “We are gonna love no matter who you are, what you do. We just want you to love yourself and also make sure that you have all the information, ” Magic Johnnson told his son.

2. Anne Hathaway will not tolerate negativity towards gay people

Anne Hathaway left the Catholic Church because of the way it’s treating gay people. She has a gay brother, Michael and when he came out the hole family converted to Episcopalianism. Anne doesn’t support “an organisation that has a limited view of my beloved brother,” referring to the Catholic Church.

1. Chris Evans is hot and so is his gay brother Scott

Scott Evans is Chris Evans’s brother and he is gay. Scott appeared in  Looking, Go-Go Boy Interrupted, and One Life to Live. The two brothers go along very well and they are both handsome!