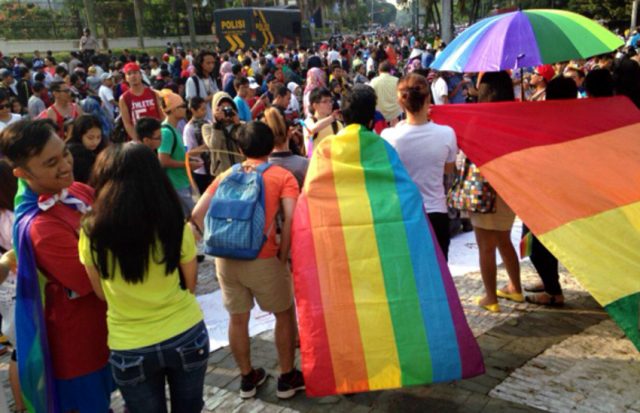 Around 50 members of an extremist religious mob barged into the gay person’s home.

Jakarta police have arrested 13 men for holding a ‘gay sex party’ even though there is no evidence they committed a crime.

Around 50 members of the Islam Defenders Front (FPI) barged into an apartment in South Jakarta, shouting ‘Allahu Akbar (God is great)!’, and forced police to arrest the group of men.

According to police, they were tipped off by a member from the extremist religious group after they spotted the group of men not wearing any shirts in a private home.

An anonymous source told the Jakarta Post were shouting slurs outside before police arrived. When officers broke into the apartment, the mob also entered and the men were taken into custody.

FPI said on Twitter the group’s ‘investigation unit’ along with the police ‘successfully broke up’ the alleged sex party on Sunday.
Raden Prabowo Argo Yuwono, spokesperson for the Jakarta Police, said on Sunday the men were arrested but the officers are still investigating whether any crime was committed.

The only items found during the raid were smartphones, condoms and HIV antiretroviral drugs.

‘We are not sure if there was any prostitution, all we know is they were playing some games there,’ Raden told reporters.
Indonesia is considering banning gay sex entirely following calls from conservative religious groups.

Family Love Alliance, a group of far-right wing Islamic activists, wants the courts to introduce a ban on consensual sex between adults of the same gender. Prison sentences are suggested to go up to 15 years.

It comes as the country has banned gay dating apps, and earlier this year Indonesia’s leading psychiatric body classified homosexuality and transgender as ‘mental disorders’ that can be ‘cured’.

Indonesian Broadcasting Commission has banned ‘gay propaganda’ and ‘effeminate males’ on TV while the defense minister has declared the LGBTI movement as ‘more dangerous than nuclear warfare’.