Home Gay Life 250,000 people take to the streets of Taiwan to call for marriage... 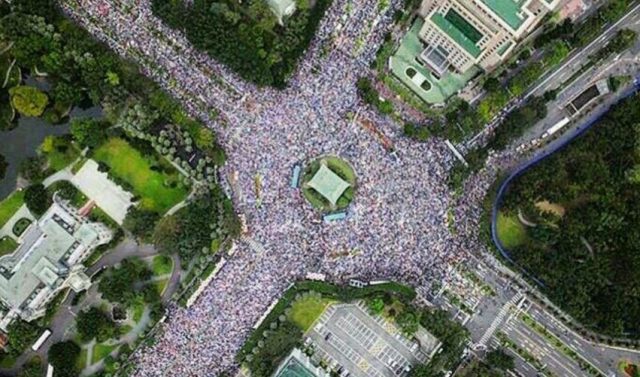 Taiwan is poised to become the first country in Asia to legalise same-sex marriage.

Taiwan is poised to become the first country in Asia to legalise same-sex marriage. While the country’s President has been a vocal supporter of equal marriage, the nations push to legalize same-sex unions was galvanised by the death of a gay professor in October, who committed suicide after being excluded from making key healthcare decisions at the end of his partner’s life.

In a statement released on Saturday, President Tsai Ing-wen said, “Same-sex couples also have the right to marriage,” and called for “more discussion but less confrontation” on the issue.

She added: “all voices should be heard and given the chance to seek support in the Legislature.”

#Taiwan
Mass rally demands marriage equality
250 000 out in the streets in front of the Presidential Office#LGBT
?https://t.co/zDp5kvrbcT pic.twitter.com/FddDYXtSDS

Saturday’s rally took the form of a concert, and saw public figures, legislators, activists and LGBT+ people and their allies, coincided with international Human Rights Day.

According to reports, the protests came a week after 70,000 people took to the streets of Taipei to oppose marriage equality.

Taiwan’s same-sex marriage bill passed its first reading in parliament in November, but after vocal backlash, a second reading was postponed. A committee will now review the bill on December 26, at which point it will have to pass second and third readings to become law.