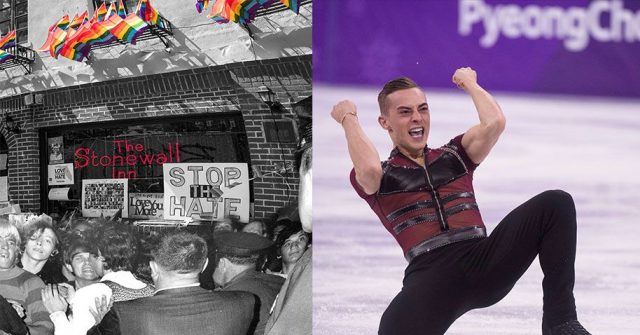 When Adam Rippon skated to an Olympic bronze medal in the 2018 Winter Olympics in South Korea, he brought audiences to tears with his program in the team skating competition.

That performance was also the first time a publicly out gay man competed in the Winter Olympics. He came out as gay publicly in 2015 — and had accomplished an act so historic and memorable, the National Museum of American History of the Smithsonian Institution asked him to send them his outfit from the 2018 Olympic free skate.

I officially donated my Olympic costume to the Smithsonian today. Pretty cool to soon have something on display in the American History Museum. Now I just need to convince someone that they need to be next to the ruby slippers.

He was already one of the best figure skaters in America, and had been so for much of the last decade. He finished second in the U.S. Championships twice and won a national title in 2016. He was ranked top-10 in the world each of the last three seasons.

Just a year and a half later, Adam Rippon is a household name, but no longer a skater. The out gay figure skater announced his retirement from competition in November, according to CBS and other outlets.

Presented with the opportunity to broaden his platform, Rippon did not squander it; he took a stand for LGBTQ inclusion in sports and in society, never holding back when talking about politicians, policies and the very presence of LGBTQ people in various walks of life.

USA today praised Rippon in November 2018 for his insightful “political statements that kept him in the spotlight. He voiced concern in a USA TODAY Sports column about Vice President Mike Pence being chosen to lead the U.S. delegation at the Pyeongchang Games, citing what he perceived to be Pence’s support for anti-gay legislation and policies.” The newspaper’s idea was that Rippon could wind up becoming a strong political figure.

At a Boston political rally a month earlier, Rippon said: “I’ve always thought one day I would run for office.”

Between those appearances on TV and for charities, Rippon has also written a book, “Beautiful On The Outside,” which is already available for pre-order and hits bookshelves this October.

Rippon wants to leave his skating behind and forge a completely new media career, hosting TV shows and internet shows, interviewing celebrities and newsmakers, and all the while being his true self.

“I want to break away from being ‘the skater,’” he said, “and I’ve been working hard to do that.”

Rippon’s new YouTube show — Break The Ice With Adam Rippon — takes discipline. Rippon launched his new YouTube channel just a month ago and already has over 78k subscribers. He produces a new video every Monday, Wednesday and Friday, but it’s his Break The Ice that showcases his ability to host and interview.

The show marries his two professional worlds — ice skating and media hosting — bringing celebrities who will brave the ice into a skating arena and onto two thin blades as they answer Rippon’s questions.

“I’m trying to learn as much as I can because I really want to channel the focus I put into being an Olympic athlete into something else. And I feel comfortable and in my comfort zone when I’m doing unscripted things. I can be myself, I can be quick.”

In December, Outsports named Rippon our Person of the Year 2018, and in a phone call with us, he reflected on what got him there.

“Winning is a huge part of sports, and medaling is incredible, it’s amazing,” he said by phone from New York last Christmas. “But the point of sports is to go into the gym or onto the ice every day and better yourself. That’s the whole point of life. I’m able to look at my sports career and be proud of it, because I got the real point of it all.”

We hope you enjoyed our “Stonewall Spirit” profiles of LGBTQ athletes who showed that incredible ingredient. Read the other 29 by clicking here for a link to our series.