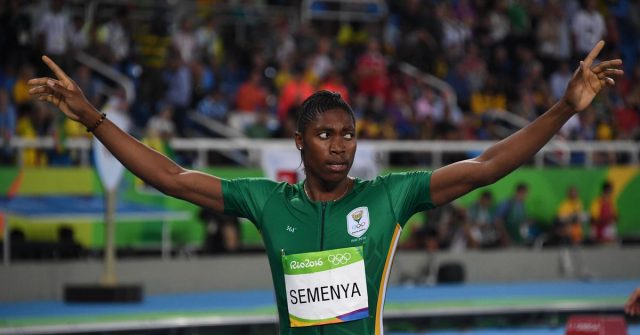 At this moment during Pride, Caster Semenya is unshackled and can compete just like every other woman. Her full appeal has yet to be heard by the supreme court of Switzerland, where international sports rulings are rendered. For now, the justices have temporary suspended the International Association for Athletic Federations regulations for female athletes like Semenya.

Their decision meant she is free to run races of all distances without medication to suppress her naturally elevated levels of testosterone.

”I am thankful to the Swiss judges for this decision,” Semenya told reporters earlier this month. “I hope that following my appeal I will once again be able to run free.”

On May 1, the Court of Arbitration for Sport labeled the IAAF’s new rule “discrimination” and in the same sentence deemed it “necessary.” Semenya and her lawyers challenged that peculiar contradiction.

“I am a woman and I am a world-class athlete,” Semenya said. “The IAAF will not drug me or stop me from being who I am.”

Court records released this week show that behind closed doors, the IAAF referred to the three-time world champion as one of a number of “biologically male athletes with female gender identities.”

Using an argument that’s familiar to anyone who has participated in debates over transgender athletes, the IAAF said it was only trying to ensure fairness in female competitions: “There are some contexts where biology has to trump identity.”

The Los Angeles Times reported that Semenya, 28, has a medical condition known as a “difference of sex development” or DSD, which is marked by levels of natural testosterone that exceed those of most women. The IAAF says that gives Semenya and women like her an unfair advantage over other female athletes, citing testosterone’s effect on muscles and blood oxygen levels. Over the years, Semenya has neither confirmed nor denied she has DSD, saying only she is a woman, and has always been female.

In February, Semenya told the Court for Arbitration for Sport: “The IAAF’s regulations do not empower anyone. Rather, they represent yet another flawed and hurtful attempt to police the sex of female athletes.” As Jezebel reported, they argue it’s just another way to police women’s bodies.

Journalist Oliver Brown wrote in The Telegraph that in 2009, he visited Semenya’s hometown, the village of Ga-Masehlong in South Africa, and spoke to her mother, Dorcus about her daughter’s critics.

‘‘They are just jealous,’’ she told Brown. ‘‘They don’t want to see black people improving themselves – they can go to hell.” Referring to her daughter by her first name, she added:

The controversial change in the IAAF rules, known as the Eligibility Regulations for Female Classification, would compel Semenya and other athletes with differences of sex development to undergo hormone treatment for six months to suppress their naturally elevated testosterone levels, in order to compete in the 400m up to one mile races and combined events over the same distances.

Semenya won the 800 meter gold medals at both the 2012 and 2016 Olympics, and also won her third world title in London two years ago.

The new IAAF rule has been called everything from “sexist” to “necessary for a level playing field for women,” and has been labeled as unethical by the World Medical Association and other international health agencies. Semenya’s lawyers say they’ll fight it as a violation of human rights.

The First Choice Foundation created an online petition in her name, titled #HandsOffCaster, that now has more than 283,000 signatures.

Another one of our 30 Stonewall Spirit heroes, who famously fought her own battles as a player and lesbian in a sport dominated by men, Tennis legend Billie Jean King joined South Africa’s president as well as scores of famous athletes and organizations in tweeting their support for Semenya:

My friend Caster Semenya is unequivocally female. Forcing women w/naturally high testosterone to give up ownership of their bodies & take drugs to compete in sport is barbaric, dangerous, and discriminatory. I stand behind her and hope she prevails. #IAAF https://t.co/L0VZ7sg2xC

This controversy has dogged her athletics career ever since she won the world 800m title as an 18-year-old in 2009.

“No man, or any other human, can stop me from running,” the track champion declared in Doha, Qatar, after winning her 30th consecutive 800m victory in 1 minute, 54.98 seconds, the third-fastest of her career and the eighth-quickest outdoors of all time.

Reporters asked Semenya whether she would ever take testosterone-suppressing medication to keep racing. “Hell no,” she said

Semenya is looking ahead, not toward quitting or switching events. The way she sees it, she still has 10 years before she retires. In fact, Semenya told reporters her goal right now is to run at the world championships this fall. “It doesn’t matter how I’m going to do it. What matters is I’ll still be here,” she said.