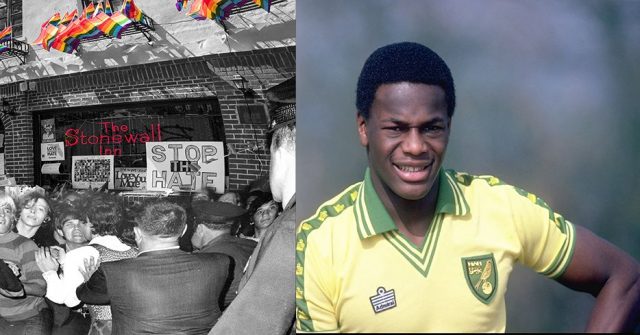 The career of former English Premier League soccer player Justin Fashanu ended when he came out as gay in 1990.

Out gay British journalist Jon Holmes wrote a story about his life for Sky Sports in February.

He had kept the secret for eight years. In 1982, a reporter had asked him “about rumors surrounding his sexuality.”

“His denial was put on the paper’s front page under the banner headline ‘I Am Not Gay’. Legal proceedings for defamation began, and the case was settled with Fashanu accepting substantial damages. Eight years later, the knee injury meant his career was limping from club to club, and by now accustomed to a certain level of celebrity, his personal life was a commodity he was finally willing to sell.”

“No club offered him a full-time contract,” wrote Holmes.

“Some of his colleagues spoke out against him, and his younger brother publicly disowned him. The press used the story to run sensational headlines, and he was the target of abuse hurled from the crowds in stadiums.”

By May 1998, accused of sexual assault, Justin Fashanu could stand no more. He hanged himself in a garage in Shoreditch, London. He was 37.

The London Telegraph reported last year that brother, John, had his own secret: he was also gay, and he paid his brother Justin $94K to keep that secret.

John, a former soccer player and TV personality, told the paper he finally realized he had acted like “a monster” to his older brother, and called on the Football Association to do more to support gay players, “as well as tackling racial and homophobic abuse.”

On February 19, 2019, what would have been his 58th birthday, Jon Holmes wrote about an artist whose work has focused on Justin Fashanu’s importance to the intersectional worlds of sport and the LGBTQ community.

“I wanted to capture a motif for his life,” says Colin Yates, reflecting on the first portrait he made of Justin Fashanu. “I thought this was the best way to represent him.”

’Ups and Downs’, with its theme of snakes and ladders, is a metaphor for the turbulent, peripatetic life of one of British football’s most mythic figures, who would have celebrated his 58th birthday on Tuesday.

Yates is among those helping to keep Fashanu’s memory alive at this time of year, with February the designated month of action for Football v Homophobia, known as The Justin Campaign when it was founded in 2008. Clubs including Manchester City (for whom the striker played briefly in 1989), Tottenham, Charlton, Exeter and Altrincham have all marked FvH in various ways in recent weeks. For those who knew Fashanu personally, and also for those who appreciate its significance, February 19 is a date to reflect on his unique legacy.

Clearly Fashanu has not been forgotten.

His former club, Norwich City, remembered Fashanu on its Twitter page, as it has in the past:

Remembering Justin Fashanu on what would have been his 58th birthday. #ncfc