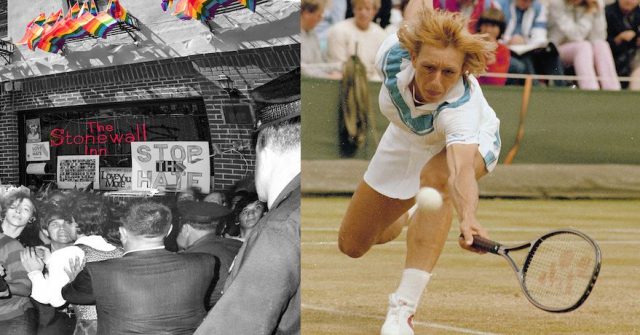 As Outsports cofounder Cyd Zeigler wrote in 2011, Martina Navratilova has achieved the kind of fame reserved for Cher, Madonna, Oprah and Sting; we know her by just her first name.

Even at age 18, her star was quickly rising with 11 Grand Slam titles already under her belt. While a small group of lesser-known athletes had come, and while Billie Jean King was outed months earlier, Navratilova was the first big-time athlete in her prime to come out publicly by her own volition.

While brave, the public revelation cost her. She told Outsports in 2007 that she believed she had lost about $10 million in endorsement deals as corporate executives in the 1980s avoided her in the midst of the AIDS scare.

When she came out of the closet in 1981, she had recently defected from Czechoslovakia to the United States. She regained her Czech citizenship 33 years later, on Jan. 9, 2008. The next year, Navratilova ended an eight-year relationship with her partner, Toni Layton, and the partner threatened to tell everything she knows. Navratilova reportedly offered Layton $200,000 as a settlement of their affairs.

In April 2010, Navratilova revealed she had a noninvasive form of breast cancer and would begin radiation treatments. Calling the diagnosis frightening and her own “personal 9/11,” she underwent a lumpectomy. She said she came forward with her diagnosis to remind women to undergo routine breast cancer screening. Not long after, Navratilova won again at Wimbledon, this time taking the Ladies’ Invitational Doubles crown.

Four and a half years later, Navratilova wed the woman she loves, longtime girlfriend Julia Lemigova, in December 2014.

Navratilova used her position as a world champion to fight the anti-gay Amendment 2 in 1992 and spoke at the gay march on Washington in 1993. She’s also worked with PETA, AARP and she spoke strongly against Communism in Eastern Europe. 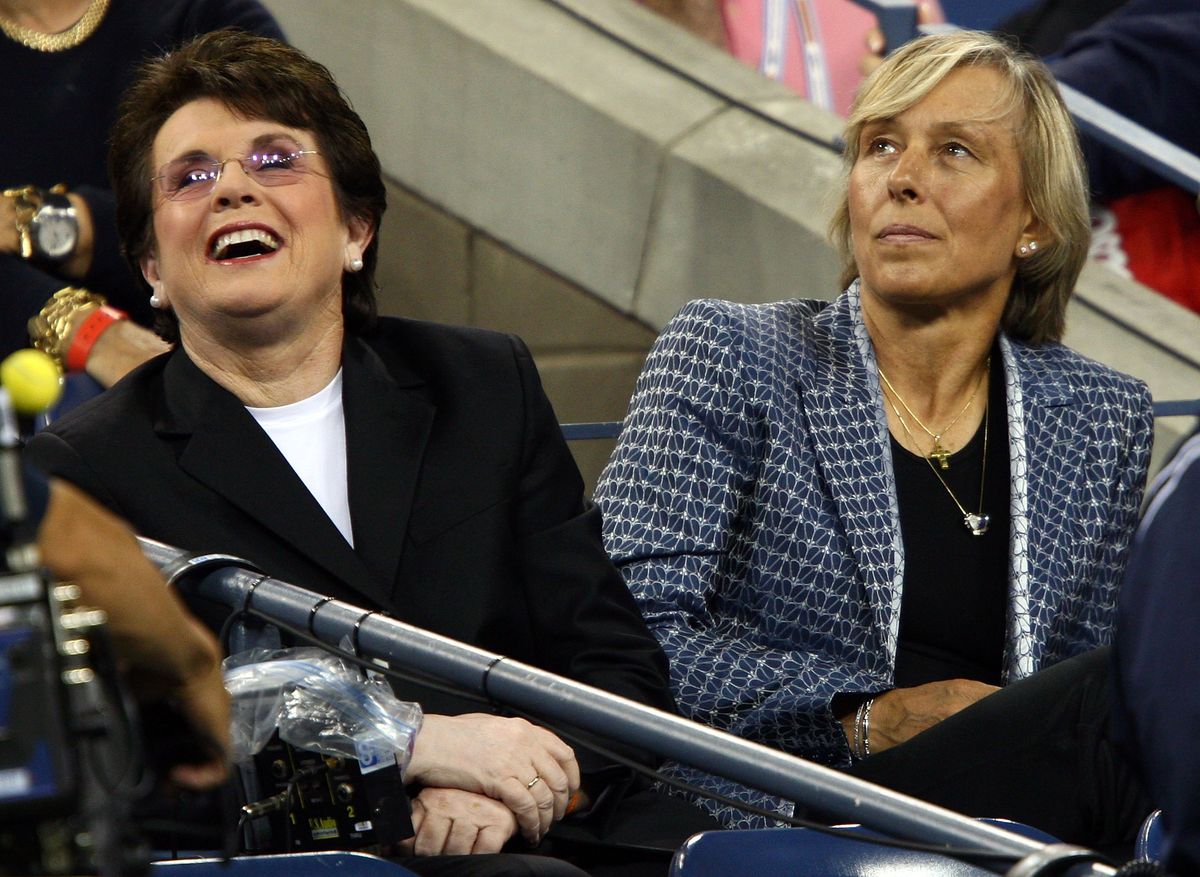 Tennis legends Billie Jean King (L) and Martina Navratilova (R) watch Carole King perform prior to the start of the Women’s Final at the 2007 U.S. Open at the Billie Jean King National Tennis Center on September 8, 2007 in Flushing, N.Y.Photo by Clive Brunskill/Getty Images

One of her allies in many of her efforts has been King, who joined Navratilova in January 2018 in calling for the name of Margaret Court to be removed from the Australian Open arena. As Outsports reported last year, Court has made many dark, anti-LGBT comments over the years, including fighting publicly against same-sex marriage.

“When she talks about the children of transgenders being from the devil, that put me over the edge,” King said.

But as of press time, King has still not sided with her longtime friend’s crusade against the inclusion of transgender women athletes. Navratilova tweeted, then deleted: “You can’t just proclaim yourself a female and be able to compete against women.”

She then vowed to educate herself. The result was an op-ed in the Sunday Times of London, in which she called the inclusion of trans athletes “is insane and it’s cheating.”

In February, King tweeted a plea for an end to “conjecture” and to let science figure out the debate.

In her tweet, King set a conciliatory tone clearly aimed at trying to douse the flames that Navratilova’s controversial op-ed had fanned. She didn’t take sides, but she did make a plea for science, not emotions or bias, to settle the matter.

Navratilova didn’t wait. In March she doubled-down with a blog entry on her website, insisting that inclusion was a step toward allowing a cisgender man to transition to female just to win trophies, medals and prize money, then resume his life as a male. No such case has ever been documented. She did express regret that she used the word “cheating.”

Other than that, Navratilova has remained quiet on the issue, with the exception of tweets on the subject to her like-minded 277K followers, as well as engaging some of her detractors and journalists. Then came word in May that stunned the trans community and its many allies: the BBC announced it had hired Navratilova as host of a documentary on transgender inclusion in sports.

Despite Navratilova’s well-documented opposition to the cause, none of that stopped the BBC from picking Navratilova to host the program titled “Trans Athletes: A Fair Playing Field?” airing next month.

In her published works on this issue, Navratilova frequently cites her friendship with transgender pioneer Renee Richards, who argues that the only trans athlete fit to compete as women must be a “true transgender transsexual,” meaning they have gender confirmation surgery to transform their male genitals into a vagina. Navratilova does not mention that every time she faced Richards in competition, the tennis legend won.

To her surprise, Republicans in Montana and right-wing anti-trans political sites such as Breitbart used her positions to further their efforts at marginalizing trans people, a move Navratilova called in a tweet “just ridiculous.”

While the inclusion debate rages on, Outsports has repeatedly invited Navratilova to engage with us and our readers on this issue, in hopes of fostering better understanding and acceptance. However, her preference is to comment on our reporting via Twitter.

To those who believe that trans girls are girls and trans women are women, her stated support for equal rights for the transgender community stands firmly at odds with her campaign for a “level playing field” for girls and women. Zeigler himself has tackled the finer points of “fairness,” drawing criticism from Navratilova and those who agree with her position that “biologically, [trans women] are still men.” They see victories by trans women athletes as “destroying women’s sports” by depriving cisgender girls and women of prizes, medals and scholarships. They don’t count the competitions trans women athletes lose.

All the athletes we’ve profiled who have “Stonewall Spirit” in some way echo the actions of the heroes of June 1969. Authority figures of that time felt it was within their power to define who the patrons of the Stonewall Inn could dance with, love, or present as in public. Those who refused to be shunned, arrested or mistreated stood up and resisted.

Navratilova did something similarly courageous when she came out and stood up for our community. Unfortunately for now, the community is divided about how best to include women athletes who are transgender, if at all. The woman most people know and revere as “Martina” is in a unique position to either bring the community together on this issue, or further split us apart.