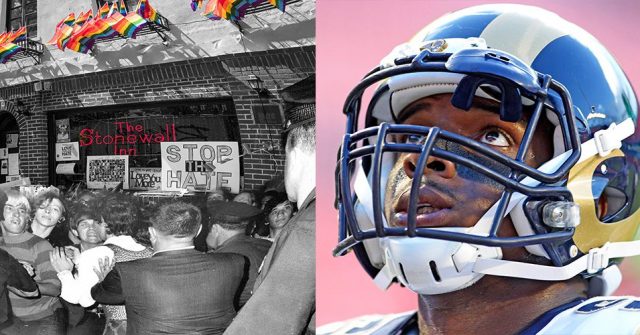 Former pro football defensive end Michael Sam no longer plays football, but he is still tackling opponents. Instead of big burly men in jerseys, Sam is taking on those who wield words, and potentially mischaracterize his past. The out trailblazer embarked on a national college speaking tour this past winter and spring, telling his story and setting the record, well, straight.

“I do not regret coming out,” Sam tweeted in February, after reports from one of those speaking engagements failed to report his exact words to students at the University of New Mexico. The reports said he regretted coming out, a topic we’ve covered before, one that requires a bit of nuance to report accurately. Outsports obtained a recording of that engagement to clarify exactly what Sam meant.

Sam said that moment of regret was five years ago, while he was in San Diego during the seventh round of the NFL Draft. He said it looked like he might not get drafted by any team. That feeling passed quickly, he said, after being embraced by his then-boyfriend Vito Cammisano, and subsequently upon learning he had in fact been drafted by the Rams.

Here’s a partial transcript of what Sam said to students at the University of New Mexico:

“I started getting emotional. I started crying. I went upstairs. I was looking at the ocean and I was hearing the seals talk to each other. And, for like, the briefest of moments I had doubt. I had regret, actually. I said, “Did I do the right thing? Should I have kept quiet?* And I didn’t even hear him come in. I felt a hand on my shoulder. I looked around and it was Vito. And he was crying, too. And he gave me the most powerful hug. And like, it just made me feel so good, I don’t care what happens in this draft. I love this guy. Pretty much, excuse my French, but ’Fuck ‘em all.’ (LAUGHTER) Fuck ’em all!”

The campus appearance by Michael Sam, the first openly gay football player ever drafted, came almost exactly five years to the day he publicly came out as gay, reported The Albquerque Journal.

”I want to own my truth,” Sam said at the time, and that is still his mission.

For Pride 2019, Sam told Paper magazine: ”If it ever comes to a point where it affects your well-being, where you have to hide yourself, where you have to be ashamed what other people might think of you — then that is a time and a moment where you need to take a stand for you well-being and the people around you.”

In 2014, Sam was the SEC co-defensive player of the year and a star defensive end for the University of Missouri. The Tigers defensive end came out to his teammates in 2013, before his senior season. They protected him and supported him, he told UNM students attending his talk in the UNM Student Union Ballroom Tuesday, except for one time.

Sam said there were actually two instances in which he felt betrayed: the first was when a Mizzou teammate called him what the Journal described as a derogatory name, during practice.

Then, after getting drafted by the Rams in May 2014, a teammate reportedly called Sam a negative name. He told his audience he stood up for himself.

But even though Sam led the Rams in sacks during that preseason and was later a practice-squad player for the Dallas Cowboys, he never played in a single regular-season game in the NFL. That, Sam said, made him angry and led to depression.

Calling it mental illness, Sam said he had to learn to forgive, starting with himself. He forgave his father who he said abandoned the family, and his brothers, who he said abused him. But Sam struggled to forgive the NFL.

“The NFL gave me a raw deal,” said Sam, according to The Albuquerque Journal. “It was tough to forgive them. I love football. Football gave me an education and gave me the opportunity I so desperately needed at the time. I really am grateful for the sport.”

He’s had so many ups and downs: from the kiss seen around the world and receiving the Arthur Ashe Award at the Espys, to his disappointment in never playing anything other than in the preseason for the NFL.

The Rams drafted him, then cut him loose; the Cowboys signed him, then dumped him. His career with the Montreal Alouettes was short-lived, and his abrupt departure a sad end to a promising career.

Yet Michael Sam continues to pour his heart and soul into what he does off the field, from using his last dance on “Dancing With The Stars” to emotionally express his fractured relationship his homophobic father, to sharing his story with Oprah and inspiring others to live their own truth. and

Whatever his reasons, whatever led to the end of his associations with the Rams and Cowboys, Sam earned the title “Outsports Person of the Year” in 2014, and he has earned a place among LGBTQ athletes who exemplify the spirit of Stonewall.