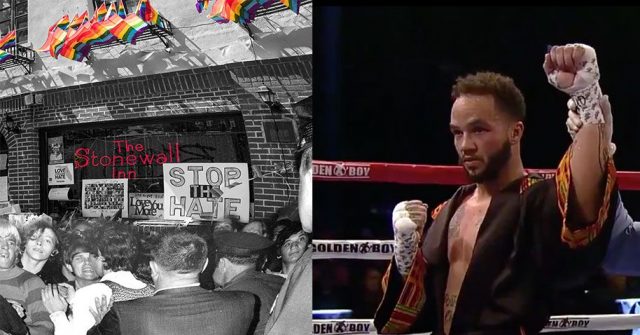 Every member of the LGBTQ community undergoes a journey toward living as their true self. And when that journey climaxes in a moment of triumph as profound as Patricio Manuel’s, it deserves to be celebrated.

One of the most noteworthy trailblazers in modern sports, Manuel is the first openly trans male boxer to win a fight at the professional level, doing so in December 2018. Just by stepping into the ring, Manuel made history as the first trans male boxer to compete professionally and he celebrated this momentous occasion by winning a unanimous decision over the previously undefeated Hugo Aguilar.

In the years prior, Manuel had fought as a female amateur boxer with the goal of representing the United States at the 2012 Olympics. However, a shoulder injury curtailed that dream, and Manuel took that enforced layoff as an opportunity to fully live his truth. Shortly afterward, he began the transitioning process.

As he was undergoing gender reassignment surgery, Manuel explained what he had been going through and how it lead to his transition:

“I’m a masculine person but I don’t want to be a man necessarily. I want to be, I guess, free of those binds. But because we live in a world where it’s male or female, I have to shift over…I want to be able to compete with males.”

The road back to competition wasn’t a smooth one. While most of his sparring partners had no problem with his transition, Manuel found himself ejected from a gym in Carson, California after the director discovered that he was a trans man. He later split with longtime trainer Roberto Luna and endured a lengthy wait to find an opponent after several boxers canceled matches with him.

Through it all, Manuel persevered and was ultimately rewarded by making history in his victory over Aguilar. After all he endured, Manuel made sure to soak it all in, telling the Los Angeles Times:

“The best part of tonight — once I got to the arena and started getting ready, get the adrenaline rushing, step through those ropes, [greet] my opponent — I loved it all.”

In the wake of the decision, Manuel declared, “I wouldn’t trade any of it. It was worth everything I went through to get to this point. I’m a professional boxer now.”