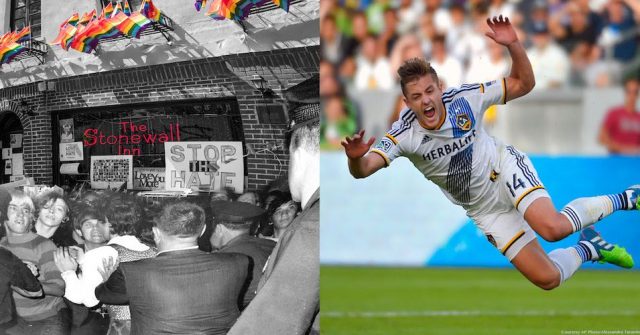 By all accounts, Robbie Rogers should have been on top of the world in 2013. His four years with the Columbus Crew had led to an MLS Cup title in 2008 and two Supporters’ Shield victories, representing the best regular season record in the league. He then successfully transferred to English football and, after recovering from an ankle injury, had just returned to the active roster on Leeds United.

And then out of nowhere, he mysteriously dropped out of sight. There was a brief announcement that Rogers and Leeds had mutually agreed to part ways with no further explanation and then silence. After a few weeks, the then-25 year old posted a message on his blog that revealed he was gay and was stepping away from the sport, proclaiming “It’s time to discover myself away from football.”

In doing so, Rogers became only the third soccer player ever to publicly come out. And after a short retirement period, it wasn’t long before he realized that he could do the most good by being out as an active player. Inspired by an audience of kids at an LGBT Youth Forum speech he gave shortly after coming out, Rogers announced that he was returning as an active player in MLS. As he explained to USA Today:

“These kids are standing up for themselves and changing the world, and I’m 25, I have a platform and a voice to be a role model. How much of a coward was I not to step up to the plate?”

Rogers did much more than simply step up, joining the Los Angeles Galaxy and overcoming another injury to help lead them to a 2014 MLS Cup title. In doing so, he became the first publicly out male athlete to win a team sports championship in the United States, showing that he had more than answered his own call to be a role model both on the field and off.

As the years went on, Rogers’ accumulated injuries eventually proved to be too much, leading him to miss the entire 2017 season and subsequently retire for good at the end of that year. Since then, he has concentrated on family life, marrying longtime partner and director Greg Berlanti shortly after his retirement.

Rogers and Berlanti had already been raising their son Caleb at the time of their wedding and in May of 2019, the couple announced the birth of their daughter Mia via Instagram. Last year, in a brief combination of their respective personal and professional lives, Rogers had a blink-and-you’ll-miss-it cameo in Berlanti’s “Love, Simon” as a soccer coach.

At the time of his first retirement, Rogers was already a champion. Thanks to the person he became after coming back, he goes down in sports history as so much more.