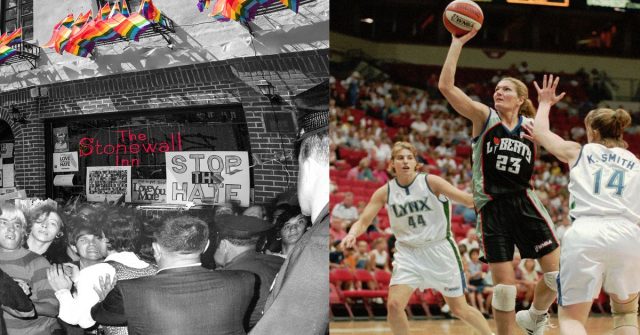 At a time when lesbians in sports were encouraged to keep their private life quiet, Sue Wicks decided to live out loud.

Wicks played six seasons with the New York Liberty, being named a WNBA All-Star in 2000 and winning the league’s sportsmanship award in 2001. Four times in that span Wicks and the Liberty made it to the WNBA Finals, losing to the dynastic Houston Comets (three times) and the Los Angeles Sparks.

Toward the end of her WNBA career Wicks was asked by a reporter from Time Out New York, “Are you gay?”

Wicks believes with that 2002 interview she was the first WNBA player to come out publicly as gay. Outsports cannot confirm that, but we do not know of someone who publicly said those words earlier.

Because the WNBA came so late in her professional career, Wicks brought wisdom and a comfort level with her own self that some of the younger athletes in the WNBA may not have had. ‘

Just being myself, being true to myself, made me happy.’

“I was already 35 years old and had lived around the world and had some ideas about who I was as a person and what made me happy,” Wicks told Outsports this week. “Just being myself, being true to myself, made me happy.”

At a time when the WNBA often avoided connections to the LGBTQ community for fear of being seen as a “lesbian” league, Wicks famously told the Village Voice, “I can’t say how many players are gay, but it would be easier to count the straight ones.”

As more and more women have found the courage to be their true selves, and as the WNBA has more openly embraced its LGBTQ players, what was once a couple out women like Wicks has blossomed into a full-fledge community of out stars who appear on every team and All-Star team. Now women across elite-level sports are becoming more comfortable with talking about the fact that elite-level women’s sports do seem to have a higher percentage of out LGBTQ women than the general population, something so many were afraid to discuss before.

Wicks was inducted into the Women’s Basketball Hall of Fame in 2013, a fitting inclusion for a woman who not only was a powerful force in college and professional basketball, but who also helped blaze a trail for so many of the out women in basketball today.

Later this month she’ll be part of the WNBA and NBA float in the Stonewall 50 World Pride March in New York.