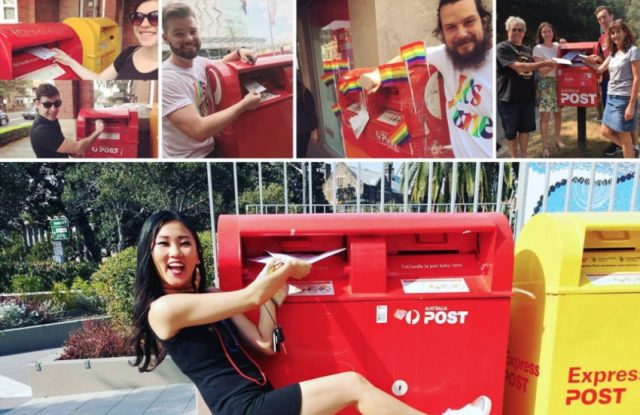 ‘You haven’t voted yes, until you’ve posted yes’. Send your votes back today!

The team running the ‘yes’ campaign for marriage equality in Australia are ‘delighted’ with the number of ballots returned in a national survey on the issue.

Australians are being asked whether they think the law should be changed to allow same-sex couples to marry. The government is holding a national, non-binding postal survey to gauge Australians view on the issue.

It commissioned the Australian Bureau of Statistics (ABS) to run the survey.

The ABS revealed today that as of Friday 29 September 2017, 57.5% of survey forms had been returned.

It began sending out the survey forms to 16 million eligible voters in mid-September, with all forms due back by November 7.

‘This turnout is a powerful sign of how the millions of respectful conversations that have taken place at kitchen tables, workplaces and across every community have motivated people and allowed them to see that marriage equality is not a what, it is a who,’ said Anna Brown co-Chair of the Equality Campaign.

No time for complacency

Even though recently polling suggested most people who have already voted have voted ‘yes’, the Equality Campaign team said there’s no time for complacency.

‘Young people need to make sure they, their friends and family return their ballots,’ said Angie Greene, Equality Campaign spokesperson.

‘You haven’t voted yes, until you’ve posted yes. This is an opportunity to be part of making Australia a fairer and more equal place.’

Australians living or travelling overseas during the postal survey were reminded how important it was for them to get their votes back on time.

‘Over a million Australians living overseas still need to return their surveys as well, either through post, online or trusted individuals, it is vital every Australians has their say,’ Anna Brown said.
Timely reminder

‘We hope that this update will serve as a reminder to those who have not submitted their form to do so promptly if they wish to have their say,’ said ABS’ Deputy Statistician and Taskforce Lead, Jonathan Palmer.

‘If you haven’t received your form, or your form is lost or damaged, please contact us via our website and we will send you a new one.

‘If you can’t access the internet, call the Information Line on 1800 572 113 (open 8am to 8pm local time seven days a week) or visit a capital city or regional form pick-up location.