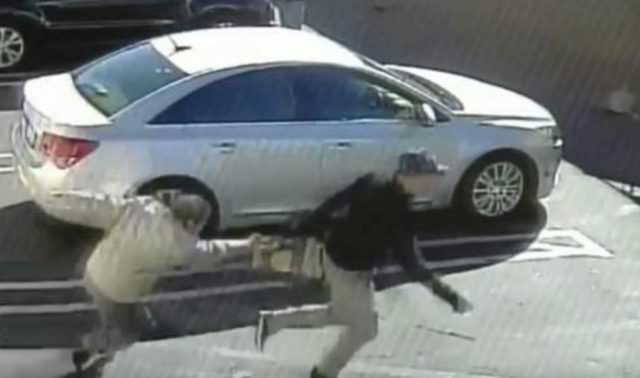 A man is being charged with a felony hate crime after a 64-year-old gay man chased him down after being hit and called a “faggot”.

Earlier this month, Richard Schiwietz was just walking down a Santa Barbara street with a friend when an unknown man approached them with his middle finger in the air and yelled, “Faggot! Your mother’s a whore!”

When Schiwietz told the man to stop, he refused and shouted, “You say one more word, and I’m going to coldcock you.”

“Try it,” Schiwietz responded. The man then proceeded to assault him.

“He punched the side of my head and knocked my glasses off,” Schiwietz told the Santa Barbara Independent.

Schiwietz’s friend, Saul Lerma, tried to stop things, but by then the man had already fled.

But Schiwietz wasn’t done with him. He recalls yelling “Stop! What are you doing?” before running after the assailant. “He was running away, and I just thought, ‘Hell, no.’” He followed the man down an alleyway before cornering him in a parking lot.

There the man, 54-year-old John Savala, yelled obscenities at local cashiers before the police showed up to arrest him. Once he was in custody, police informed Schiwietz that he was known to them.

Savala was booked into county jail and following an investigation of the attack, District Attorney Joyce Dudley charged him with a felony hate crime.

The attack came as quite the shock to Schiwietz and other residents of Santa Barbara, which is known for being a liberal town.