Home Gay Life A church is getting sweet revenge against vandals who defaced their pride... 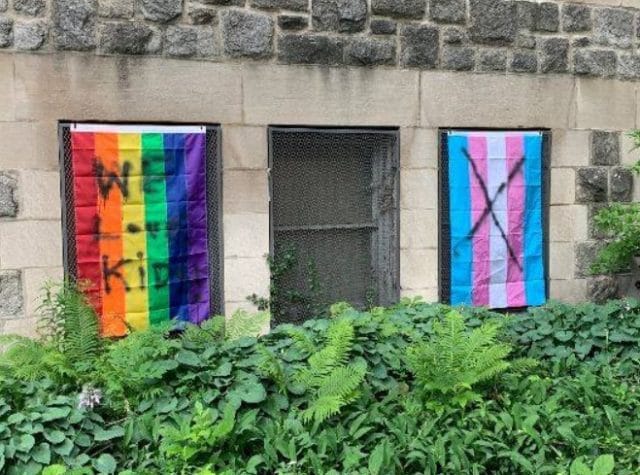 A church is planning out planting “hundreds” of Pride flags after their flags fell victim to vandalism.

The Wicker Park Lutheran Church in Chicago flies a rainbow flag and a transgender flag year-round outside its doors.

Over a week ago, someone tore down the flags. The church put them back up, but then over the weekend they were vandalized.

At 3 am this past Sunday, someone was caught on video spray-painting in black on the flags. The vandal painted a giant “X” on the transgender flag and “WE LOVE KIDS” on the rainbow flag, possibly to link homosexuality with pedophilia.

In an email to the congregation, Reverend Jason Glombicki said that this only shows that the congregation has to do more work to make the world welcoming to LGBTQ people.

“As a congregation, our work continues,” he wrote. “While preaching the love of all people each week might seem a bore, while it may seem like the city is welcoming to all sexual orientations and gender identities, and while it seems like something like this would never happen in Wicker Park, our message of radical welcome[…] still needs amplification in the here and now.”

The message also says that the church filed police reports for each incident and turned over the evidence that they had.

But the church is planning to do more to spread the message of inclusivity for Pride Month: they’re going to be planting hundreds of flags near the spot where the two flags were defaced this coming weekend.

“I invite you to join me as we gather to sing songs that rebel against a hate-filled world, join me as we remember our baptismal vow to renounce ‘the structures of inequality and agents of oppression that unmind God’s purposes,’ and join me as we fill our front garden with hundreds of rainbow flags in an act of loving defiance,” Glombicki wrote to the congregation.

He told WGN 9 that the vandal’s work is contrary to the church’s message of love.