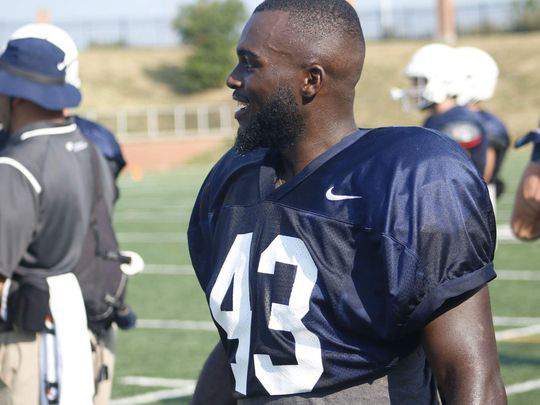 Xavier Colvin is a 20-year-old sophomore majoring in marketing at Butler University. He’s 5’9”, 210 pounds, has the nickname of “X,” the son of a two-time Super Bowl winner, and is a linebacker for Butler’s football team.

The reason that we’re talking about Colvin here is that in August he stood on stage in front of his fellow Butler Bulldogs and announced that he was gay.

Colvin admits that he had known about his sexuality for years and before even entering college, but decided to stay in the closet for fear of rejection from his peers and a potential career in the sport. That said, eventually it became too much of a burden for him.

“Timing is perfect. This team, this year, this coaching staff, it’s great.”

Before officially coming out, Colvin contacted close friends, trusted teammates, and his coach Jeff Voris who said that it was an “non-issue.”

As for his father Rosevelt Colvin, who was a former professional linebacker in the NFL between the years of 1999 and 2008 and won the Super Bowl twice with the New England Patriots, Colvin says there was no issue there either.

This year, several college football players have come out, and Xavier Colvin is just the most recent. But, it’s good to hear that his story is also one that’s been accepted so easily.

Good for Colvin and good luck with the upcoming football season.