Home Gay Life A Fight Broke Out Between Trump’s Right-Wing Guests And Reporters In White... 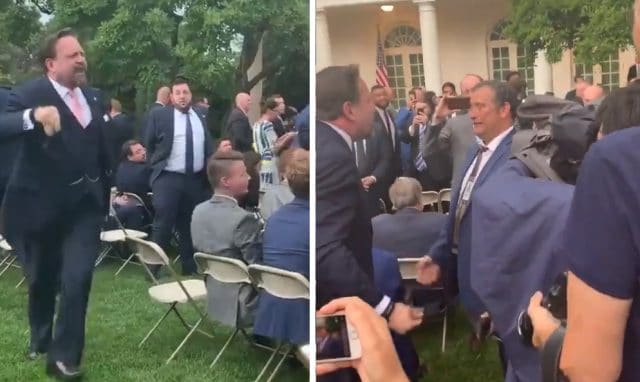 A group of right-wing conspiracy theorists who attended President Trump’s social media summit on Thursday clashed with reporters in the Rose Garden after they were invited to sit in on an announcement about the 2020 census.

After the president announced that he was dropping his bid to add a citizenship question to the census, he quickly retreated inside without taking any questions from the press.

Sebastian Gorka, a former White House adviser, ran over to engage with Playboy correspondent Brian Karem moments after the conclusion of Trump’s remarks.

Gorka could be heard calling Karem a “punk” and accused the journalist of threatening him as the two exchanged words.

Fellow conservative personalities in the crowd broke into a chant of “Gorka!” as they filmed the encounter.

Gorka later spoke to reporters nearby and was asked why he blocks so many people on Twitter.

“I block whoever I want to. I block 16,000 people,” he told Voice of America’s Steve Herman. “Because they’re asshats, that’s why.”

Joy Villa, a vocal Trump supporter, turned to the press and told them to “stop reporting fake news.”

“How many copy editors do you have?” Karem asked Villa.

“We don’t need to have that. We just have our voice,” Villa responded.