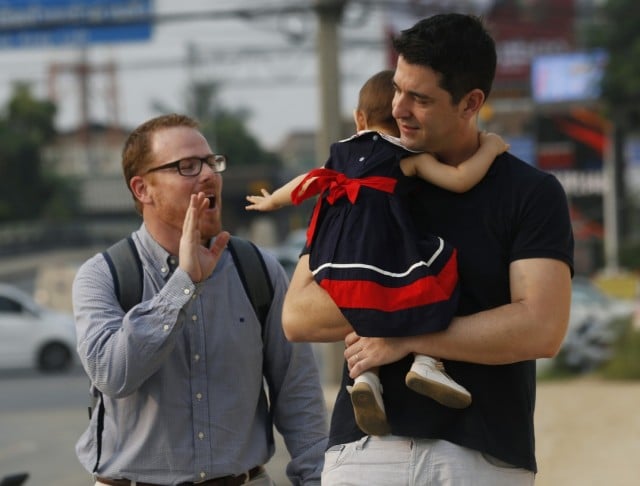 A high-profile custody battle has started in Thailand. Gordon Lake and Manuel Valero, a married gay couple living in Spain, are fighting their Thai surrogate for custody of Carmen, their 14-month old daughter.

Lake and Valero have been trapped in Thailand for more than a year after their surrogate refused to sign the papers needed to get Carmen a passport. Patidta Kusolsang, the Thai surrogate, reportedly handed the newborn over to the new fathers, but had a change of heart after the couple left the hospital.

Gordon Lake is Carmen’s biological father and the egg came via anonymous donor, so Kusolsang isn’t biologically related to the infant. According to the Telegraph, Lake had always been upfront with New Life, the surrogacy agency, about being gay and his relationship with Valero.

“We’re the people that wanted to have a child. We just want to go home and we just want to be a family. A normal boring family,” Lake said.

Although Kusolsang has no biological claim to the child, Thai law doesn’t recognize same-sex marriage and recently banned commercial surrogacy in the country. Gay Times reported that Thai law recognizes the woman who gives birth as the legal mother. Last year, Kusolsang spoke to NPR and said, “They are not natural parents in Thai society. They are same-sex, not like male and female that can take care of babies.”

Since her refusal to sign over custody, Lake, Valero, and their daughter have been hiding out in Thailand, scared that she’d be taken away. The couple even started #BringCarmenHome, a crowdfunding campaign on Fundly, so they could afford to remain in Thailand and fight this battle. The campaign has rasied more than $36,000 of the proposed $45,000 goal.

“Baby Carmen has the right to be with her biological father, who supports her financially and has cared for her since she was born. The priority is to consider the benefit for children and that they have the right to live with their biological parent.”

Testimony in the case begins March 31.