Home Gay Life A gay couple who were drugged and raped in Thailand have spoken... 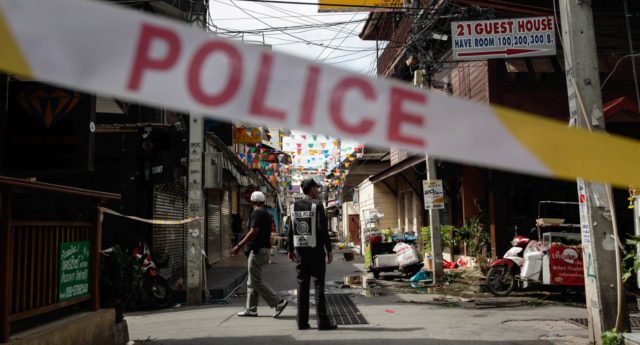 A gay couple from the UK have opened up about a horrific attack in which they were drugged, raped and robbed while on their dream holiday in Thailand.

The couple were on a night out in Phuket celebrating New Years Eve when their drinks were spiked and they were attacked.

The two 33-year-olds, from Belfast, were robbed of their iPhones and over £400 before being subjected to a “terrifying” sexual assault.

The couple, who cannot be legally named, told Belfast Live about the horrific ordeal.

“On the night we were attacked [my husband] and I decided to go out for some drinks to celebrate New Year’s Eve. We had a beer in one bar and then moved on to another.

“It was in the second bar that our drinks were spiked with a date-rape drug. After that we can’t remember anything. It was only well after the attack took place that we realised that we had been attacked and raped.”

It was the couple’s sixth holiday to the country, but following the attack they have vowed to never return.

“We have been to Thailand before, but we have never experienced anything like this. It has just been a very traumatic time for both of us. We have had to be tested for HIV and given an HPV vaccine and tested for syphilis.”

The couple have attacked their insurance providers, OUL Direct, over their method of handling the case.

They accused the company of “abandoning” them, after they failed to tell them what hospital they could go to.

After five days of waiting to be told, the couple reached out to the British embassy in Bangkok who sent them to a hospital which ultimately did not accept their insurance documents.

From there, they were ordered to a private hospital which neglected to tell them that their insurance would not cover costs until after the testing and procedures were completed.

The couple claim that the company told them to leave the hospital without paying the costs as long as they had their passports. However, they refused to do this because it is illegal.
Now, the couple are demanding an apology from OUL Direct.

“The insurance company have said they will listen back to the recorded telephone conversations we had with them, but I won’t be holding my breath. I am not expecting any action from them. They are supposed to offer a 24-hour medical response, but we waited five days and nothing happened.

“I just hope this doesn’t happen to anyone else.”

A spokesman for OUL Direct said: “We take all complaints very seriously and are sorry that this situation has occurred. However, OUL Direct do not deal with emergency assistance cases directly and therefore we are not aware of the details of this case at this time.

“The company who operates the emergency assistance service on behalf of the underwriter on this policy is Travel Assistance Facilities. We will also investigate this situation as a matter of urgency.”