Home Gay Life A gay dad had a powerful message for his friends and family... 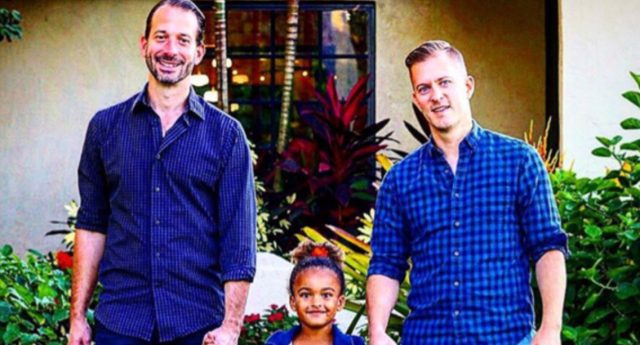 A gay father has written a powerful message to his friends and family who voted for Trump.

Michael Anderson addressed his Facebook friends with an essay that nails why he doesn’t feel secure in his country anymore, and why the outcome of the Presidential elections has erased his and his families sense of belonging. He starts of the post by acknowledging that he understands why his acquaintances may have voted for Tump, and supports change.

However, he goes on to explain that Trump and Pence aren’t the refreshment the “stagnant government” needed.

“It’s easy to get caught up in our lives and our problems and not worry about the lives of people who don’t seem relatable to us. We are all guilty of this. I am guilty of this.

But I am from one of these concerned groups, and you know me. You might even like me,” he added.

Anderson notes that he always knew there were people who wanted to hurt him, just for being him, but felt the government provided a form of protection.

The father and husband also feels comfort in knowing he is married in the eyes of the law and that his child’s adoption and overall family is “protected and legitimate.”

But after Tuesday, that comforting feeling of security is gone.

He writes: “I suddenly don’t feel secure anymore. Vice president-elect Pence has an extensive anti-gay record from supporting gay conversion therapy on kids that literally includes trying to (but failing to) electro-shock the gay out, to signing legislation in his state in 2013 to jail any same-sex couple who attempted to get a marriage certificate.

“All of the progress that we have made that gives my family a sense of belonging and security is very likely to be erased.

“I’m scared that there are people out there who feel empowered because our president-elect has not distanced himself from the KKK and other hate groups.

“Without condemnation comes permission, and I honestly don’t feel like government under this administration would do much to protect me,” Anderson added.

The future is daunting for the Anderson and his husband, who are worried about their children and what a Trump-Pence presidency will have in store for them.

Anderson is urging his friends and family to come together and make the most of what is to come, and stand tall in the face of hatred.

“I want you to think about me and my family and how it affects other people like us when our rights and protections get taken away. And my real hope is that we can all think beyond the bubbles we live in and about every group in our country that is frightened, including so many who have so much more reason to be worried than I do.”

“People aren’t whining about losing; they are deeply mourning the loss of hope that they too can feel included and be happy in America, the land of the free.”