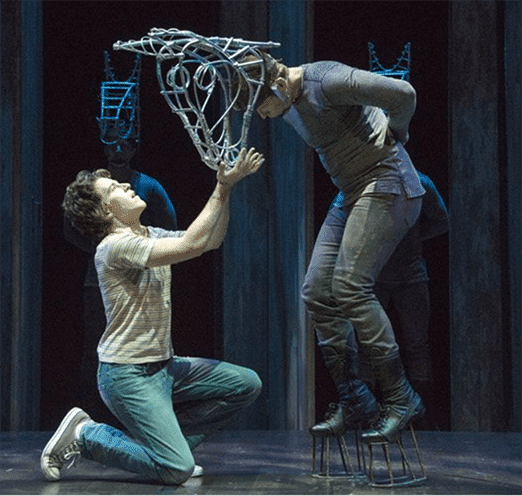 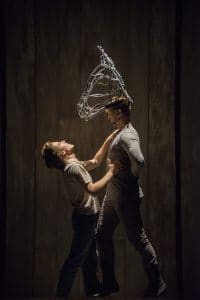 If you aren’t familiar with the play, it is a fictional story about a boy who blinded  six horses and is committed to a mental hospital for treatment. While it is fictional, the impetus for it, was an actual news report about a boy blinding six horses. Even if this play doesn’t tell that actual story, a real story exists and to me, that is terrifying and intrigung. I guess, because of that, it was an easy stretch to see the characters in the play as real persons, and that drew me into the story immediately.

As I see it, there are three main characters in the story line: the boy, Alan; his psychiatrist, Dysart; and Nugget, a horse; and there are interesting, tension-filled dynamics between and within this triangulation. But of real interest to me, is the one between Alan and the horse, where there is a visceral eroticism that is bold and prurient from the very first moment that we see the horse’s chest being caressed by Alan’s hand.

In many reviews and descriptions of the play, a central theme is this notion of the boy becoming one with the horse. And that makes sense to me, but from my perspective, the play is all about homosexuality, and the horse is a symbol for one’s unbridled sexuality which is big and scary and exhilarating. But unlike a more contemporary coming of age story, in this play the characters are unable to see and accept one’s queerness.  Alan blinds the horses as a way to blot out and make invisible his passion and his true identity. Dysart, his doctor, admits that he himself has numbed and buried his own sense of passion. Dysart’s relationship problems with his wife are all we need to know to call him a closeted, self-unaware homosexual.

The homo-eroticism must be a central theme for Petyerf Shafer, the playwright, or he could easily have had women play the horses. No, the strength, power and sensuality of the horse is interlocked and dependent upon the gonadal maleness of the creature. As Alan and the horse become one, these power qualities merge with a naive and untempered vulnerable passion. This is the very best essence of what sexual pleasure can be.

We have to consider this play from the perspective of the era in which it was written. Homosexuality was only removed from being called a mental illness in 1974. Consider Equus as compared to Boys in the Band, which was first produced in 1968. It is easy to find all the characters in that show as terribly flawed and neurotic. And there is no real sense of sex in Boys in the Band, but they are the men trying to live out a life owning one’s passion- unlike Dysart’s approach, which is to kill or bury that passion under layers of mediocrity.

Many will probably focus on the full frontal nudity, to describe the homoerotic physicality of the play. There are beautiful images throughout the play, beginning with Alan’s caressing of the horse. One that was especially moving for me, was a moment when Alan is straddling the horse/actor’s back, while he is describing to his doctor, the experience of being on the horse. Alan’s thighs are sensuously embracing the torso of the man/horse: so erotic-  even though both are fully dressed. Also potent, are the moments when the horse stall doors open and we see the horse-men standing back in the darkness. They remind me of men cruising in the park or the dark back rooms of some bars.

And then, there is the nudity.

In one regard you might think this would be the most homoerotic element of the play, but I don’t think it is. I’d describe it, as fully emotionally riveting. Or maybe a better way to put that, would be to say, that the physical eroticism is in direct contrast and contradiction to the emotional upheaval Alan is experiencing, making this portion of the story, potent and draining for the audience.

It is as if what is happening on Alan’s inside becomes visible on the outside, and that is a very beautiful and vulnerable thing. This truly cathartic scene seems to pass in an instant, though in reality may have gone on for a while- I really have no idea just how long it lasted. But I know there was a wonderful beauty about it.

No discussion about the play would be complete without talking more about the horses and their hooves.  The hooves add a ritualistic drum-like quality to the play, and become another manifestation of the sensuality and power present in the horses. The hooves have a high-heel like quality too, elevating the actors to horse-like height, but at the same time, adding a queer, drag-like quality too. Watching these actors-turned-equine creatures is mesmerizing, as the sound is amplifies the rhythmic physical movement. Clip, clop, clip, clop, the horse actor’s presence can not be ignored or denied, just as Alan’s inner feelings and complexities must come out.

For me, this is one of the shows where a cohesive ensemble of the performers must exist for the play to really work. This cast rises to that expectation wonderfully, and every cast member excels. As with every show at the Public, lighting, set, sound and costumes are perfection.

Equus runs through October 29th. Tickets are available at https://www.ppt.org/production/51423/equus.