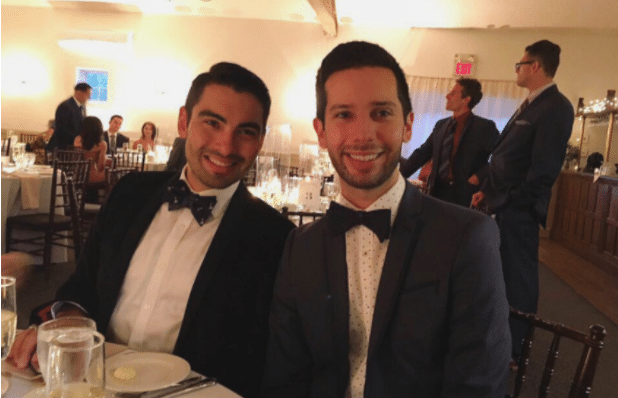 Everyone goes into meltdown when there is a professional photographer at an event.

Mike T explained to Buzzfeed he was at a friend’s wedding when the incident took place.

He said: ‘Everything went really beautifully.’

We’re assuming this was until the picture happened.

The wedding’s professional photographer caught Mike T and his boyfriend off guard.

The following image is a result of that.

OK SO DID I DO SOMETHING TO OFFEND THE WEDDING PHOTOGRAPHER? pic.twitter.com/Fc041Bofkk

Mike tweeted the picture over the weekend after the bride sent it to him.

While his boyfriend, Andrew, looks great, something about Mike looks a little… off.

Mike told Buzzfeed him and Andrew ‘died laughing at it.’
He’s taken it in his stride though.

Should I make this my new profile pic? pic.twitter.com/ev1QlRhHAa

Mike asked his followers why he thinks the photographer hates him in a poll.

63% believed it was probably because of how attractive Andrew is. Mike agreed.

Mike said his boyfriend looked like ‘a snack’ while he was more like a ‘decaying vodka gummy bear.’

Apparently, a few photographers have told Mike ‘the wedding snapper definitely knew what she was doing.’

Mike believes that she just had a ‘really good sense of humor and figured it would be a funny shot to share.’

The GIF reactions have been amazing

With a double forehead. Why was this done to you? pic.twitter.com/hIV3bXpQmC