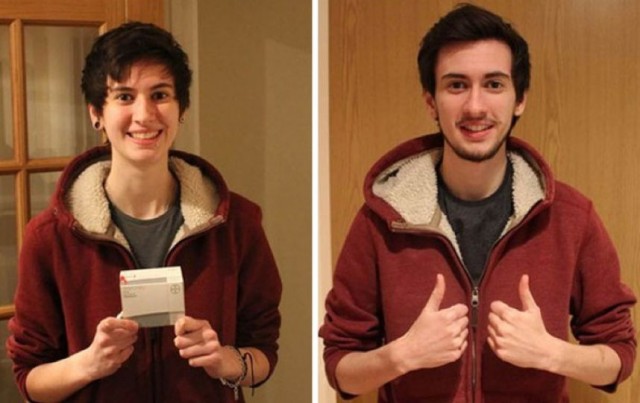 At 18 Jamie Raines started taking testosterone to transition from female to male and for 3 whole years he has been taking selfies to monitor the transformation. Initially he wanted to do it for just one year, but the fact that he didn’t grow any facial hair in that first year made him go on with documenting the process of transformation. “Some people get loads of facial hair within the first six months, and some people never get it,” he explained. After the second year, the transformation took a higher level and he finally started to grow facial hair. “I was waiting for it once I first started getting a couple of chin hairs,” he said. “It was really exciting.” The shape of his face transformed too, it got a longer shape and he lost the chubby cheeks. After three years on testosterone, the transformation was complete, he had a full beard, and his appearance was totally masculine. Jamie is very grateful for his looks and he has support from his girlfriend and from his family too: “My mum thinks this was always how I was supposed to be. She doesn’t feel like she’s lost a daughter, because I’m the same person to her – I’m still her child, but now I’m just her son.” He also shared the non-physical effects of the treatment, saying that now he is less emotional, but except that his personality hasn’t changed. What is his advice for transgender men? Surrounding with a community that is supportive (friends, family) and being patient.

In 3 years, Jamie took 1400 photos and put them in a video that was remarked by a TV producer from Channel 4 and included the video in a documentary about transgender men.