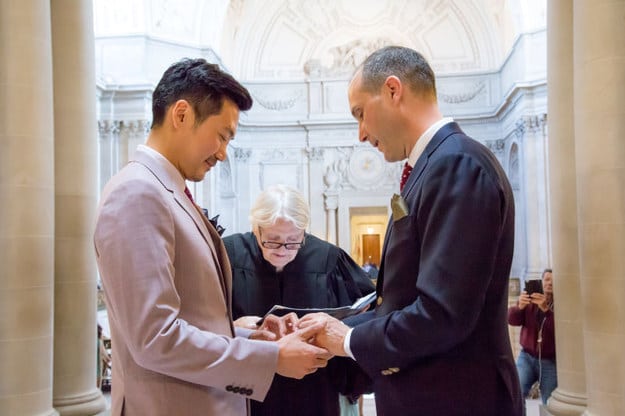 The consul-general in Shanghai, Hanscom Smith, and his boyfriend announced about their wedding in the U.S. on Hanscom’s official Weibo page.

It was couple’s second attemp to tie marriage knot. The first attempt of a gay Chinese couple to win the right to get married was failed. But the couple didn’t stop. And finally they found a way out. The couple got married finally on Tuesday, April, 4 in San Francisco. Hanscom Smith, who is currently a consul general in Shanghai, was officially married to his longtime partner, Eric Lu, in San Fransciso’s City Hall. It happened! Now they are pronounced husband and husband to each other! “It’s time to share with everyone the good news!” Hanscom Smith announced on his official Weibo account with the hashtag #VacationOfConsulGeneral. Before the wedding ceremony, Smith introduced his beau to his nearest and dearest and showed his hometown that is situated in Maine.

It isn’t legal for same-sex couples to get married in China and the biggest negative reaction from Chinese Internet users the couple got is that Eric Lu is so cute husband.

“Ah, a Chinese cutie is tricked away” was a comment of one user on Weibo.

“We get married on the same day! I wanted to do it in San Fransisco but the procedure is a bit complicated, so we did it in Las Vegas. We should thank the U.S. for allowing same-sex marriage,” another user added.

Just check out how happy this couple is: Their faces shine with happiness and joy! Their common dream finally came true! Wish everyone experience the feeling of love!