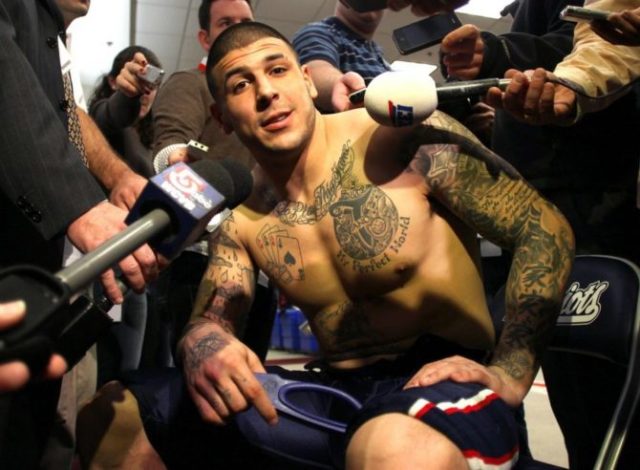 Shayanna Jenkins-Hernandez, the fiancee of the late NFL player Aaron Hernandez, is once again denying rumors her man was gay in the foreword to a new book by defense attorney Jose Baez.

Just to recap: The 27-year-old former Patriots star was serving a life sentence for murder when he was found dead in his prison cell in 2017. The cause of death was ruled a suicide. Afterwards, rumors quickly began circulating that Hernandez was either gay or bisexual and that he had had a jailhouse lover, a claim his family continues to deny.

In the forward to Baez’s Unnecessary Roughness: Inside the Trial and Final Days of Aaron Hernandez, Jenkins-Hernandez writes:

There has been much speculation about Aaron’s sexuality since his death. I can say this: Aaron was very much a man to me. I saw no indication that he was gay or homosexual. I wish I had known how he felt, just so we could have talked about it. I wouldn’t have disowned him. I would have been supportive. I can’t fault him if he was feeling that way. When you love someone so much you just want to be there to support them. The fact that he felt he couldn’t come out to me or he couldn’t tell me these things hurts, because we had that bond. I’ve accepted that he may have been the way he was said to be, or that it may not be true. Regardless, I won’t know.

Jenkins-Hernandez made similar remarks during a sit-down with Dr. Phil last year.

“I had no indication or any feeling that he was [gay],” she insisted during the interview. “He was very much a man to me. I don’t know where this came from.”

She continued, “It’s embarrassing, in a sense. It’s hurtful. Regardless if it was true or not, it’s just not something that I saw. It’s not something I believe, and it’s not him.”

In an interview for Oxygen’s special Aaron Hernandez Uncovered, however, defense attorney George Leontire said the former NFL player definitely struggled with his attractive to men.

“Aaron and I talked about his sexuality,” said Leontire. “This man clearly was gay. [He] acknowledged it. Acknowledged the immense pain that it caused him…I think that he also came out of a culture that was so negative about gay people that he exhibited some self-hatred.”

During the special, Hernandez’s college girlfriend, Alyssa Anderson, said she often suspected Hernandez was attracted to men. She also recounted the time she caught him texting with another guy.

“Back in college, there were text messages I saw on his phone when he came back from a trip [that were] from a male,” she revealed in the doc. “[They] didn’t have a name, didn’t really say too much, but it was a relationship with somebody and I questioned it.”

In our estimation, if Hernandez was attracted to men, but he also had relationships with women, then he wasn’t gay. He was bisexual. But, as Jenkins-Hernandez stated, we will never truly know.