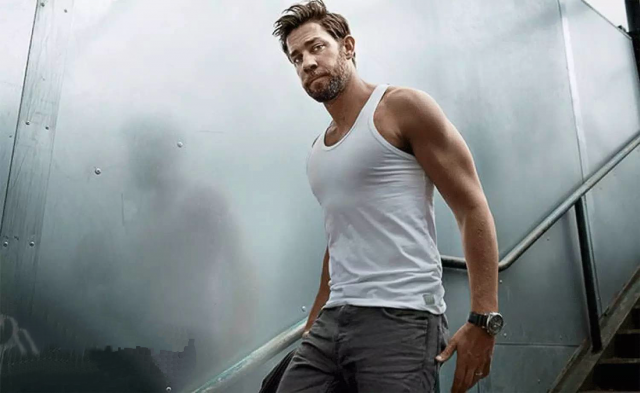 Hello. If you’re here, it’s because you remember John Krasinski from “The Office” and heard he’s been keeping busy at the gym. Well, it’s all true.

Krasinski has indeed been lifting weights in order to play a sneaky CIA agent in 13 Hours: The Secret Soldiers of Benghazi. In fact, Elle reports he’s packed on 25 pounds of muscle. And Elle don’t lie.

Thank you to @menshealthmag for putting this dude on the cover

They’re also not afraid to ask the tough questions. They ask Krasinski if his sex life has improved ever since he got really blocky with all the muscles everywhere.

“Absolutely,” he says. “And again, totally selfishly, it is so much better for me being jacked because you feel so much more confident and you see yourself as this much more sexual person, which is really fun.”

You’re probably wondering what his wife Emily Blunt thinks about all this muscle business. Fortunately, she’s all for it. She’s decidedly, defiantly pro-muscle.

“The truth is, she really is that person who would like me any way,” he admits. “But I don’t think she’s going to kick the eight-pack abs out of bed.”

Oh, also: According to online publication tooFab, Krasinki admitted to Conan O’Brien that he wasn’t always so keen on transforming his body into a drool-worthy slab of unmitigated hunkiness.

Until a screen test for Captain America changed everything. Yeah. When he climbed into that superhero suit, all that apprehension just went right out the window.

“And I got to right about my waist, I was still shirtless,” he tells Conan, “feeling pretty good about myself. I wasn’t 13 Hours [built] yet but I felt pretty good.”

But then Chris Hemsworth walked in, as he often does in situations like these, and Krasinki was humbled.