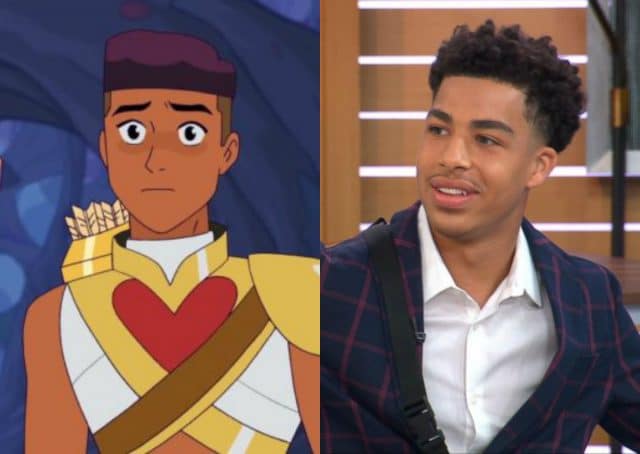 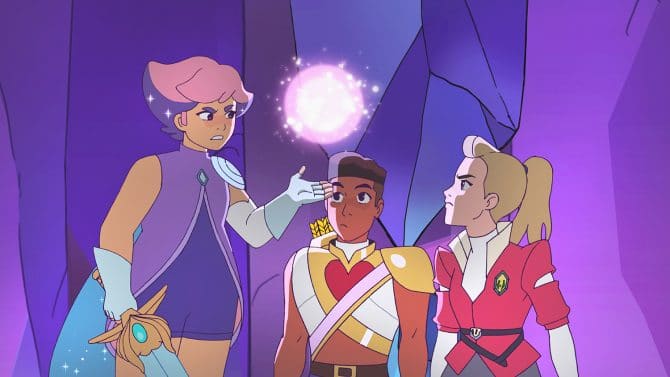 Marcus Scribner, 19, already plays regular characters on two different series, ABC’s Black-ish, where he portrays Andre Jr., and as the heroic archer Bow on Netflix’s She-Ra and the Princesses of Power, which returns for a third season August 2.

We chatted with the precocious actor on the eve of the new season of She-Ra, quite possibly the queerest show on TV.

No shame. I love the animation. It’s so unique. I know a lot of adults watch the show because it has a lot of real-world themes. It’s an exciting show to watch.

It’s pretty interesting. I remember first getting the audition, and I was looking at what Bow looked like back in the day. I thought there is no chance I’m going to get this. Bow back in the day sounded nothing like my voice or what I look like. But I went in, found out that they were reworking the whole show to be more reflective of modern times in character design. I saw the design for Bow and he looked exactly like me.

Noelle [Stevenson, showrunner & head writer] said as soon as I walked in the room she thought that’s Bow. But she kept her composure and was like I need him to audition first. I did the VO recording for Bow’s character, and she was like the voice is also Bow. I was super excited for the audition; my parents were huge fans of She-Ra and He-Man. So it was a super dope audition. Noelle is so nice. It’s been great. 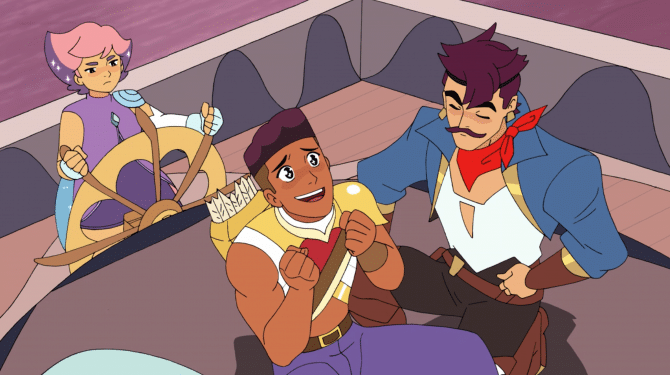 At the beginning, it was just sort of characteristics you glance off the surface of Bow. He’s a supportive character. He loves his friends. He’s a nice guy, very cheery. Over time, as we learned about the writing styles and some of the different flavors I bring to Bow, I think we just figured out his character. I have him his voice cracks and his squeaks and his cheery nature. So it was a learning process. From the beginning, Noelle told me Bow was the moral compass/cheerleader of the group.

So I gave my impersonation of that and try to hold it down as well as possible.

Oh no. I thought it was extremely exciting, honestly, just how unique the take was on the world. It was a super dope experience for me and Sea Hawk being the only two main cast male protagonists. I just thought it was exciting for male characters to be the support in a story as opposed to the lead. It was something I was excited about. 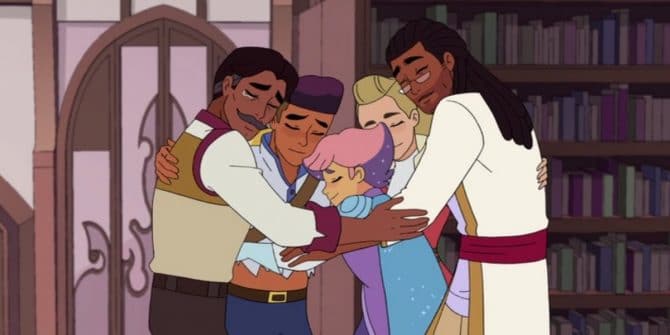 It never was a super big deal to me. I think Noelle was like in this episode we meet Bow’s parents, who happen to be two dads. I feel like the cool part about She-Ra is that it just normalizes the whole situation. It doesn’t make too big a deal of it. A lot of people in our current, modern society have two dads, and the show is reflective of that. We weren’t trying to shine a spotlight on it. It just is what it is.

I don’t really think he cares, to be honest.

I think, like you say, everybody in the She-Ra universe—I always point to the fact that they “ship” [a fan term for a wished-for relationshp] Catra and Adora, or Catra and Scorpia. It’s just a really fluid universe.

It’s always interesting especially for voice-over to formulate something beforehand. So a lot of times, with voice over, I get concept art of a character and maybe a personality type. And you just do your best to interpret what that sounds like, whether it’s your normal voice or a twist on your normal voice. A voice that I get to do a lot is this kind of “dumb” voice. I used it on Wonder Park recently. I did it in Home: Adventures of Tip & Oh on Netflix. It’s kind of crazy because you never know what will catch. It’s definitely a different preparation because, with voice, you can use your hands. You can go all-out on the mic. You don’t worry about facial expressions. It’s all about what you bring with your vocal cords.

Booming Voice From Dreamworks on High: YOU HAVE TO WAIT AND SEE!

MS: Thank goodness we have them on the line. I didn’t know what to say to that one! But yes, Season 3 I’m super excited for. Most of the cast has a flip, whether that’s personality or physical. Each one of the characters in the cast isn’t what they appeared to be when we first started the show and met them. So…yeah…that’s what I’ll say. At Comic-Con we were also dancing around this. But Season 3 there’s a flip.

It’s definitely an amazing experience. One thing I always say about She-Ra, that I’m really proud of is that the show reflects our current rainbow of our society. Every color, every body type, every sexual orientation…I just think it’s really exciting that a show can bring all that together. We were talking about it at Comic-Con, back in the day, the original She-Ra every single male or female character had the same body with a different head [for toy selling purposes]. It’s just cool to see the change and see people represented on the screen. I feel like cartoons, obviously, from the earliest stage, when people start to see themselves on TV, it’s really important to give someone a positive image of themselves. It makes me feel proud.

Ah, well, we got some Sundance finance, so we’re super pumped about it. It’s about an Angolan family learning how to reconnect in the United States after spending time apart. It’s pretty exciting. We’re talking about summer 2020 maybe.

We’ll see what they have in store for us.

Season 3 of She-Ra and the Princesses of Power lands on Netflix August 2.