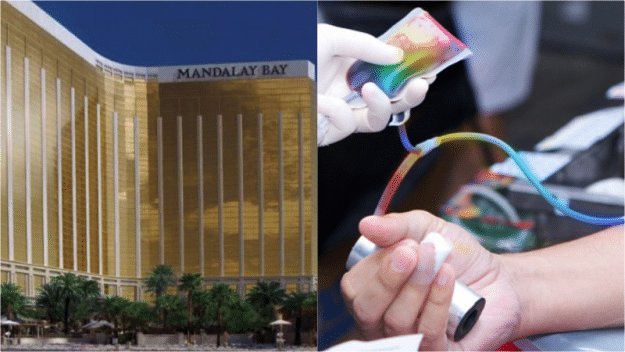 59 people died, and at least 527 more were injured, in the deadliest mass shooting in US history.

Yesterday, 64-year-old Stephen Paddock was identified as the gunman who fired a spray of bullets onto the crowd of an open-air country music festival on the Las Vegas strip, from the 32nd floor window of his Mandalay Bay Hotel room.

But in the wake of the horrifying massacre, Las Vegas residents have shown their resolve, and have banded together to raise money for shooting victims, and to donate blood to help those injured, and to gather supplies for those in need.

No more donations needed at Thomas & Mack! All the water, food and supplies are being packed up and rerouted. pic.twitter.com/UF5GYHkdxV

Sadly, not everyone who wanted to help has been able to.

And that is because gay and bisexual men are still not permitted to donate blood.

According to Food and Drug Administration guidelines strictly adhered to by the American Red Cross, “a man who has had sex with another man during the past 12 months” is not permitted to make a blood donation.

In response to the antiquated guidelines, many people took to Twitter to vent their frustrations.

Among them was former *NSYNC member Lance Bass.

How is it STILL illegal for gays to donate blood??!! I want to donate and I'm not allowed. ?

All local straight people should do this!

It infuriates me that gay & bisexual men can be turned away from donating blood in Las Vegas because of the @US_FDA's discriminatory policy.

rly wish i could donate my gay blood

It is 2017.
We've had multiple humanitarian crises and mass shootings.
And gay folks still cannot immediately donate blood.
It is 2017. https://t.co/RC5LDTxI3r

Dr. Kristopher Wells with the Institute for Sexual Minority Studies says the ban started after the AIDS scare over 30 years ago but notes that modern testing can weed out just about any infected blood.

“I understand that the federal government does want to move forward on this, what’s holding things back is Canadian Blood Services, holding onto outdated stereotypes and discriminatory practices.

“We should never deny anybody who wants to be able to step up and help from being able to do so. We know that there are blood shortages, quite regularly, and there is a whole pool of eligible people who are really wanting to give blood and they’re still being denied by outdated stereotypes and prejudice. It’s 2017, it’s time for that to come to an end.”