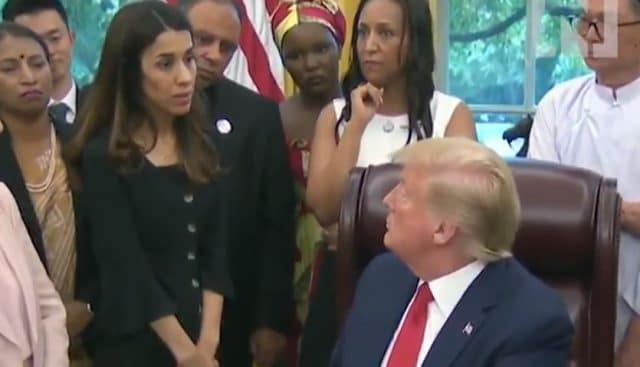 President Trump met with human rights activist Nadia Murad, an Iraqi who was awarded a Nobel Peace Prize in 2018 for speaking out about her rape and torture while in Islamic State captivity, for several minutes in the Oval Office on Wednesday, reports the Washington Post.

Murad implored the president to help her Yazidi ethnic minority return to Iraq while standing beside a seated Trump, who “mostly avoided eye contact with Murad.”

Murad, who now lives in Germany, explained that the ISIS may be gone but that Iraqis and Kurds are now fighting for control over Yazidi lands, reports the Post.

“If I cannot go to my home and live in a safe place and get my dignity back, this is not about ISIS,” she told Trump. “It’s about I’m in danger. My people cannot go back.”

Murad told the president that she never wanted to be a refu­gee but that ISIS murdered her mother and six brothers.

“They [ISIS] killed my mom, my six brothers,” Murad said.

“Where are they now?” Trump interrupted.

“They killed them,” she repeated. “They are in the mass grave in Sinjar, and I’m still fighting just to live in safety.”

“I know the area very well that you’re talking about,” Trump responded.

Trump reassured her he would look into it “very strongly.”

As she began to back away from his desk, Trump said: “And you had the Nobel Prize. That’s incredible. They gave it to you for what reason?”

“For what reason?” Murad replied. “For, after all this happened to me, I didn’t give up. I made it clear to everyone that ISIS raped thousands of Yazidi women.”

She explained she was the first woman to get out and speak publicly about what was happening to her community.

“I escaped, but I don’t have my freedom yet,” she said.

As the Post notes: “Trump has said that he deserves a Nobel Peace Prize for his work on Syria and North Korea and has lamented that President Barack Obama received one during his first year in office.”

Watch the exchange, below: