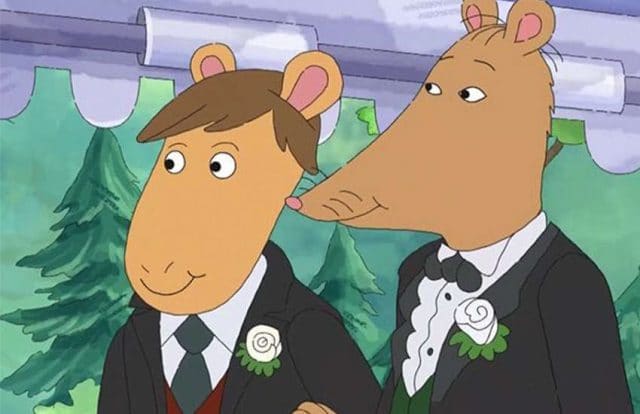 Alabama Public Television (APT) chose not to air a recent episode of the animated children’s show Arthur which depicted a same-sex wedding.

A week ago, PBS aired the Season 22 premiere of Arthur called Mr. Ratburn and the Special Someone.

Following the broadcast, people both praised and lambasted the show for its warm-hearted and innocent representation. Unsurprisingly, many conservative commentators railed against the series, calling it a ‘culture war’ among other things.

Alabama so far is the only known state not to air the episode.

Mike Mckenzie, director of programming at APT, said PBS sent out a statement to broadcasters before the episode aired. APT decided to air a re-run of the series instead.

In a statement to AL.com, Mckenzie explained the broadcaster’s decision to not air the episode.

‘Parents have trusted Alabama Public Television for more than 50 years to provide children’s programs that entertain, educate and inspire,’ he wrote.

‘More importantly – although we strongly encourage parents to watch television with their children and talk about what they have learned afterwards – parents trust that their children can watch APT without their supervision. We also know that children who are younger than the “target” audience for Arthur also watch the program.’

This is not the first time APT chose not to air an episode of Arthur.

In 2005, Buster, a character in the show, visited a girl with two moms. At the time, APT said they have ‘a trust with parents’ and Arthur didn’t fit in to that.

Not everyone supported APT’s decision.

Misty Souder, a substitute teacher, recorded the episode to watch with her daughter. Both were disappointed when the recorded episode turned out to be a re-run.

Souder said she reached out to APT and used the experience to teach her daughter about speaking out.

‘I just want her to be aware,’ she said. ‘There’s too much going on not to stand up for stuff, even if it’s Arthur. I never thought I’d be going to battle for a gay rat wedding, but here we are.’

LGBTI kids share heartwarming stories of coming out to their mom