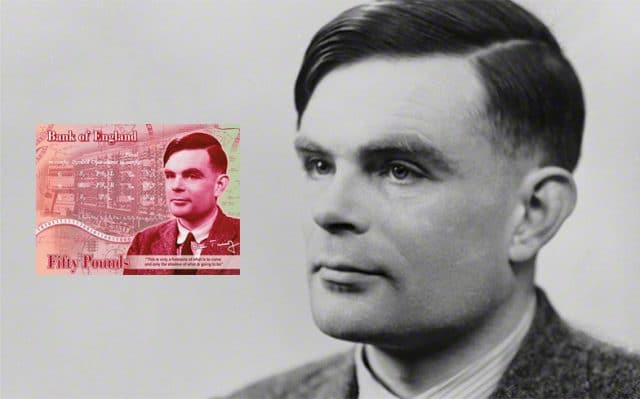 The gay scientist and World War Two codebreaker, who was named the ‘greatest person of the 20th century’ by the BBC this year, will replace steam engine pioneers James Watt and Matthew Boulton when the note goes into circulation in 2021.

It will feature a well-known photo of Turing, imagery relating to his historic work, and a quote from him which reads: “This is only a foretaste of what is to come and only the shadow of what is going to be.”

The decision comes after a six-week public consultation to find a scientist to be the face of the new £50 note. The Bank of England received 227,299 nominations, covering 989 eligible people including Stephen Hawking and Ada Lovelace.

“Alan Turing was an outstanding mathematician whose work has had an enormous impact on how we live today,” said Bank of England governor Mark Carney.

“As the father of computer science and artificial intelligence, as well as a war hero, Alan Turing’s contributions were far ranging and path breaking. Turing is a giant on whose shoulders so many now stand.”

Turing was best known for helping in the effort to crack the German Enigma codes, something which is credited with bringing World War II to end years earlier than expected. Turing is also widely credited as the grandfather of modern computing.

However, due to his sexuality, Alan Turing was chemically castrated and barred from working for GCHQ, and eventually driven to suicide.

Since the advancement of LGBTQ rights, Turing has gained his rightful place in LGBTQ history and had his accomplishments widely recognised.

A law which pardoned thousands of gay and bisexual men who were convicted under now-abolished anti-LGBTQ offences was named in his honour, and Turing himself was royally pardoned in 2013.

LGBTQ activist Peter Tatchell called Turing “one of the greatest minds of the twentieth century” and praised the Bank of England’s decision to honour him on such a grand scale.

“As a pioneer of computing science, his theories laid the foundation of the modern world, including everything from the internet and email to mobile phones, space exploration and life-saving medical technologies.”