Home Gay Life Alan Turing, WWII Code-Breaker Who Was Castrated For Being Gay, Will Grace... 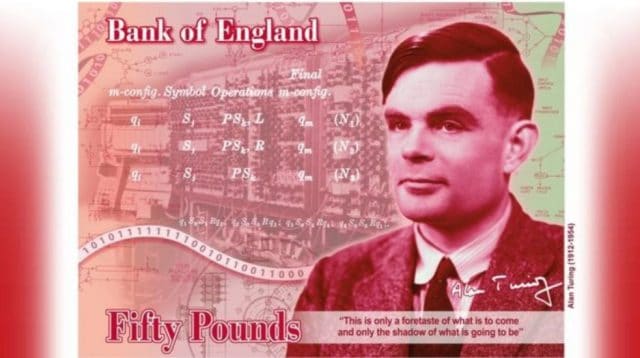 Alan Turing, a crack World War II code-breaker and visionary mathematician who was convicted under Victorian-era anti-gay laws, will be the face of Britain’s new £50 note.

“Alan Turing was an outstanding mathematician whose work has had an enormous impact on how we live today,” said Bank of England governor Mark Carney.

“As the father of computer science and artificial intelligence, as well as a war hero, Alan Turing’s contributions were far-ranging and path-breaking. Turing is a giant on whose shoulders so many now stand.”

Turing, who was educated in Sherborne, Dorset, played a crucial role in WWII by helping accelerate Allied efforts to read Nazi Naval messages enciphered with the Enigma machine.

His efforts to crack Germany’s Enigma code, which remained a secret for decades, is now credited with saving thousands of lives and shortening the war.

He is also celebrated for the pivotal role he played in the development of early computers, first at the National Physical Laboratory and later at the University of Manchester.

In 2013, he was given a posthumous royal pardon for his 1952 conviction for having a homosexual relationship with a 19-year-old Manchester man.

Turing killed himself in 1954 after he was subjected to chemical castration.