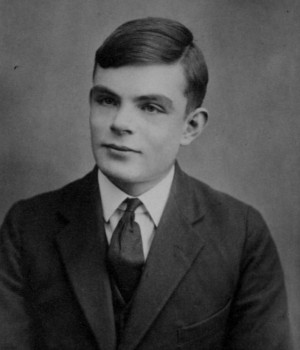 Alan Turing is a world famous english mathematician, logician and cryptographer, who was responsible for breaking the Nazi Enigma code during World War II. His work led to the creation of the computer!

Turing took his own life in 1954, two years after being confirmed as gay. Homosexuality was still a crime in Great Britain at the time, and Turing was convicted of “indecency.” He died from eating an apple laced with cyanide. He was only 41 years old.

But his three handwritten letters — hidden from the world until this week — reveal his thoughts about his sexuality, his love life, and his relationship with his mother.

“I have had a dream, indicating rather clearly that I am on the way of being hetero, though I don’t accept it with much enthusiasm, neither awake, nor in dreams,” we can find these words in one of his letters, where he wrote about his life after the punishment that was supposed to “cure” his homosexuality. He accepted the treatment with estrogen injections (which means “chemical castration”) as an alternative to prison.

“My mother has been staying here, and we seem to be getting along a lot better. I have been subjecting her to a good deal of sexual enlightenment and she seems to have stood up to it very well. There was a rather absurd dream I had the other night, in which I asked my mother’s opinion about going to bed with some men and she said: ‘Oh very well, but don’t go walking naked all over the place, like you did before.’

We can find all these in his letters to Nick Furbank, his friend, in the 1950’s. It happened after Turing was convicted for “gross indecency” for having sex with another man. Turing’s nephew, Sir Dermot Turing, decided to write a whole book entitled “Prof: Alan Turing Decoded” , dedicated to his outstanding relative.

“I expect to lie in the sun, talk French and modern Greek, and make love, though the sex and nationality… have yet to be decided; in fact, it is quite possible that this item will be altogether omitted,” he wrote in another letter, sent before a planned vacation in France. “I want a permanent relationship and I might feel inclined to reject anything which, by its nature, could not be permanent.”

The first photos of the letters were posted by “The Guardian” and you can also watch a great movie with Benedict Cumberbatch, who portrayed Turing in “The Imitation Game” – a film that received the Oscar this year.