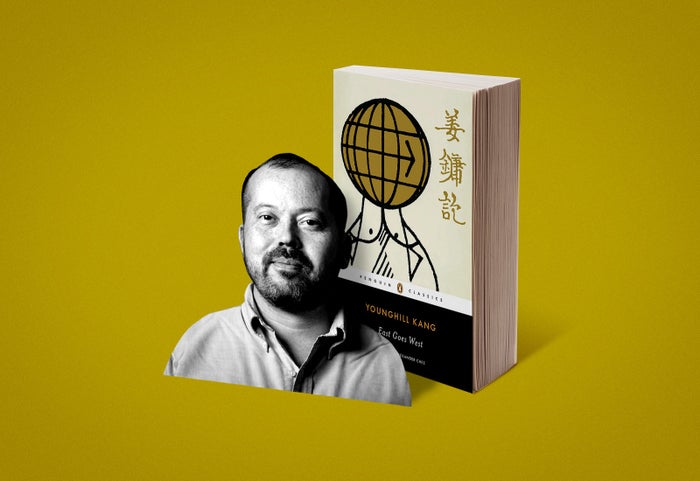 The novel East Goes West was the first to detail in fiction the experiences of a Korean American in America, by the first Korean American novelist, Younghill Kang. First published in 1937, East Goes West would later inspire the Filipino American Carlos Bulosan’s novel America Is in the Heart, published 28 years later — Bulosan quite openly said that Kang’s success emboldened him to write. Bulosan’s novel was also groundbreaking and inspirational, and so there is a seismic line to draw in Asian American fiction that begins with Kang and extends, in a series of autobiographical novels by Asian American writers, into the present. A line I’ll draw all the way to myself.

I was not inspired directly by Kang with my first autobiographical novel, though I can say that East Goes West changed something in me, and that my work after I read it will forever reflect this. Both Kang’s work and his existence changed my sense of belonging to this country, and I can see I inhabit a space he made for me. He is one of those writers whose work has influenced you even if you’ve never read him. I first discovered him more than ten years ago, in 2007, six years after my debut. Discovering him was also painful to me because his experience was so familiar. Like him, I also had felt singular, and that I myself had to be the writer I was looking for in this world. Like me, Kang found that his work and his biography were often conflated.

Kang was born in 1903 in Korea, in a small town called Song Dune Chi, whose location is given frequently as “three hundred miles north of Seoul,” in the province of Hamgyong, located on the eastern coast of what is now North Korea, along the border of Russia and China. He was educated in the classics of Chinese and Korean literature at an early age and, disobeying his father, left home to get a science education in Seoul, traveling on foot for those three hundred miles. Upon discovering that the Japanese occupation schools did not teach Western science in Korea, only in Japan, he left to learn what the Japanese had kept for themselves. “I bought the clothes of a Japanese boy and stowed away on a boat for Japan.” He was thirteen years old.

Like him, I also had felt singular, and that I myself had to be the writer I was looking for in this world.

Kang’s real autobiography appears in glimpses like this one, in articles published over his long career, a career won at great cost to him. By the age of fifteen, he left a job teaching math in Japan to return to his family in Korea, in time to participate in the historic March 1 Independence March in 1919. The references to Japanese prisons in his work are informed by his experience of this brutally suppressed protest, of which Kang reports that seven thousand Koreans were killed and fifty thousand imprisoned, himself included. The Western Christian missionaries in his books are likely inspired by the work he did upon leaving prison, assisting Mrs. H. H. Underwood, the famous missionary, in translating the works of John Bunyan into Korean — his first experience doing translation, which he would do for the rest of his life. Kang was sent back to a Japanese prison after being caught trying to pass through Siberia and escape to America. After his release, he came to America at last, as a missionary’s servant.

In his photos, Kang looks so young, so guileless, it stuns me. When I first saw them, I thought, he has the smile of a boy who might never have seen heartbreak. But now, I think it is the smile of one who, after great struggle, has found a life in literature.

The first time I read East Goes West, I admit I was interested in the novel as an artifact: Kang was writing without Asian American literary role models. There were other Korean American writers around him at the time, certainly, and other writers, such as Tom Wolfe, who met and befriended Kang when they were both adjuncts teaching English literature at New York University. Their friendship would result in Wolfe introducing Kang to his editor, the legendary Maxwell Perkins, at Scribner’s, and this resulted in the publication of Kang’s first novel, The Grass Roof. But he was making Asian American literature up as he went along. Kang has been criticized by some modern scholars for the pose he strikes of someone explaining Korea to the West, but his life had told him that he couldn’t expect Americans to even know what Korea was, like the white American in East Goes West who confuses the protagonist, Chungpa Han, for a “Chinee”: “I couldn’t make him understand about Korea,” Han says.

I also didn’t expect to see so much of myself in Han. He is, like myself, a pak‑sa — an oldest son, a scholarly young man from an aristocratic Yangban family in Korea. He has literary aspirations, but they do not lie in Korea — Han is intent on escaping what he sees as a country with no future, Korea under Japanese occupation. Like I did, he dreams of being a New Yorker, and shortly after arriving in New York City, he is so happy to be there that he performs a kind of dance on a bench in Union Square.

Some of what I recognized of myself in Han was in his descriptions of his friends, the other Koreans he meets, struggling to make their way in New York — men like George Jum, the former ambassador, who teaches Han how to shave and shower. Jum and the Korean Institute that he takes Han to in New York reminded me of my father and the Korean American Friendship Association of Maine, an organization that my father cofounded roughly fifty years after East Goes West was first published, and that showed new Korean immigrants in Maine where to get a bank account, how to enroll their children in school, how to pay taxes, how to get a driver’s license, how to do all the things Americans take for granted. I had the feeling of meeting an uncle, separated by the years, and the novel turned out to be full of these uncles, many of them poets or at least scholars inclined toward poetry. In that sense it is also a novel about poets and poetry — with poets and poetry as a means for surviving the world.

[ Related: «How To Write An Autobiographical Novel» by Alexander Chee ]

What I couldn’t imagine until it was described for me in this novel was something central to Han and Kang both: the experience of seeing the country and culture you were born into destroyed, and of everything you loved seeming powerless in the face of this destruction. Before reading Kang, the Japanese occupation of Korea was something that I, like many in the United States, understood only distantly. The way in which Japan turned Korea into a highway for its war with Russia, for example, had never been as plain to me as it was in his writing, and especially how one of the starkest insults of the occupation was that the destruction of Korean culture was not even, in the end, a goal of that war. It was just a perfunctory assault on the way to a greater one.

Kang wrote East Goes West after the success of his first novel, which described Chungpa Han’s upbringing in Korea during the Japanese occupation, and he was awarded a Guggenheim fellowship to write it in 1933 — making him the first Asian, and the first Korean American, to win a Guggenheim. He would win one more. When he applied, he observed, in answer to the American citizenship question, that Japan had dissolved Korea in 1910, and that he lived in America under the Exclusion Act — and was thus stateless. He applied with the intent to write a novel about race in America, and the frequent attempts by critics and historians to call East Goes West an autobiography erases this. The novel is, more importantly, a picaresque about Chungpa Han’s experiences in America among those cut off from the American dream for not being white enough, and the diversity of its characters — Korean, Black, Chinese, Malaysian, Italian, Hungarian, Russian — is both familiar to any New Yorker, and also sadly still unusual to see in contemporary American writing. New York doesn’t offer the happy road to success that Han hoped for, and so he leaves, and the novel eventually becomes Han’s road trip across America — a hitchhiking novel, and thus something of a travelogue. It isn’t an autobiography at all, but a road novel in which America is reintroduced to us through the eyes of this stateless Korean poet. Perkins tried to get Kang to write a happier book, but Kang had deliberately imagined a less successful and happy life for Han than the one he himself had lived, in part to dramatize the plight of those less fortunate than he was.

It isn’t an autobiography at all, but a road novel in which America is reintroduced to us through the eyes of this stateless Korean poet.

One of my favorite moments in the novel takes place near the end, when Han meets my imperfect reflection, a biracial Japanese Jewish man in Maine, almost a hundred years before my Korean immigrant father and white mother moved to Maine with me and my brother. Growing up, I had always been made to believe I was the first ever mixed race Asian American in the history of the state — and I even wanted, at age twelve, to convert to Judaism. But I love this novel not just because it gives back to me in this way. Central to it are the lives of the other Koreans whom Han finds also living in America, all waiting for their full humanity— and their intellectual and artistic gifts — to be recognized, trying at the same time to survive in the mix of haphazard circumstances that the prejudice of white Americans allowed. Scholars of Asian American history also note the portrait of the Harlem Renaissance visible here as authentic and rare, and the novel’s ending expresses a solidarity with African Americans that current Asian American activist politics are still trying to live up to. This novel was radical in its time and is radical now — but to be so, it must be read as a novel. Some have read the ending as tragic, and while I won’t describe it here, Han clearly says, “It is a dream of good omen.” Kang wrote East Goes West as a call to action, a call for the country to live up to the dream it has of itself, and it has kindled in me something I feel quite powerfully now, a gift from both the poet in the novel and the poet who wrote it. ●

Alexander Chee is the author of the novels Edinburgh, The Queen of the Night, and the essay collection How To Write An Autobiographical Novel. He is a contributing editor at The New Republic, and an editor at large at VQR. His essays and stories have appeared in The New York Times Book Review, T Magazine, Tin House, Slate, Guernica, and Out, among others.