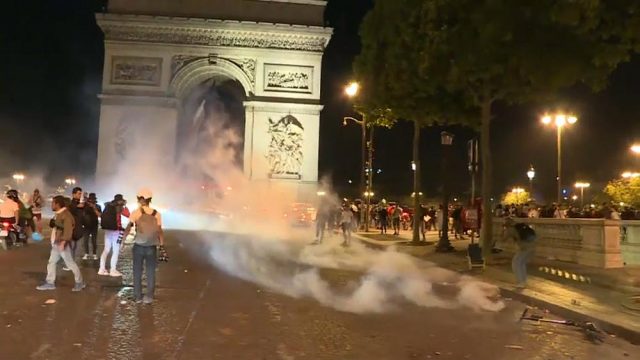 Algeria booked their ticket to the final of the Africa Cup of Nations with a 2-1 win over Nigeria. Their fans in France were out celebrating late into the night – but the joy descended into clashes with police in Paris, Marseille and Lyon.

Around 282 people were arrested in France yesterday, which included football revellers and some who were out protesting for Bastille Day. Political protesters smashed property and set fire to bins in Paris during national day festivities there earlier in the day. Tear gas was used in Paris and in Marseille, and Marseille’s Old Port area had been closed off in anticipation of a public disturbance.

France’s Interior Minister, Christope Castaner, thanked the police and firefighters who worked through the night.

The football celebrations were a similar scene to the one that happened last Thursday, when Algeria went through on penalties against the Ivory Coast, and more mayhem is possible after the final in Cairo on Friday. Algeria will face Senegal for the title at 2100 CET.