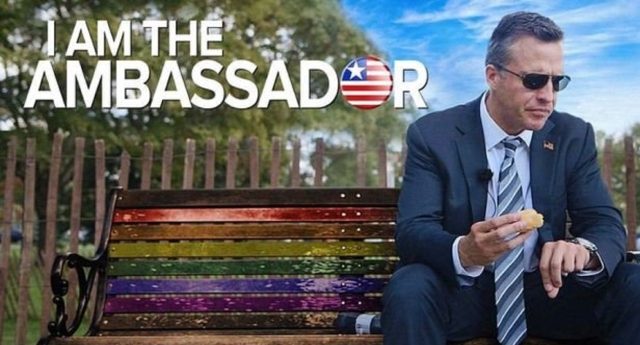 Incoming President Trump has ordered the “immediate” removal of all ambassadors appointed by President Obama, in a departure from usual protocol.

When Obama took office in 2008, there were no openly gay ambassadors representing the US – and the President sought to counter the lack of representation by appointing a string of out ambassadors to countries around the world.

However, all of them are being immediately sacked by Donald Trump – who has issued an unprecedented notice warning all of the current President’s appointees to make arrangements to leave their overseas posts by Inauguration Day, “without exceptions” and regardless of family circumstances.

The move is a departure from existing protocol, which allows for a staggered grace period lasting months in which politically-appointed diplomats are gradually removed as replacements are selected.

It comes after Trump allies called for US diplomacy to be “purged” of supporters of LGBT rights.

A senior Trump transition official insisted to the New York Times that the move was not intended to be spiteful, and was simply about making sure the ambassadors depart on schedule.

However, diplomatic experts say the move could leave a number of countries without US ambassadors for lengthy periods during which replacements are processed by Congress, risking cutting off or harming relations in the intervening period.

Julianne Smith, director of the Strategy and Statecraft Program at the Center for a New American Security, told NBC News: “You do not want to have a situation where countries are left without a direct link to the president for that long.

“Ambassadors can calm down any anxiety. Without that, countries reading Twitter and press releases could be left guessing.

“If you’re a country where you have got some friction with the U.S. … you are going to find yourself without an interlocutor. Number twos are often very capable senior diplomats, but in times of crisis these countries want someone with a direct line to the President.”