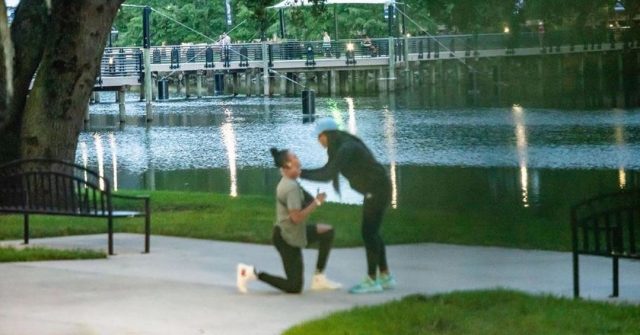 The photos posted on Instagram show the couple in a park, beginning with them snapping a picture together. Then Cloud gets down on one knee to propose to Ocasio.

Cloud’s announcement comes just a couple of hours after the WNBA All-Star game wrapped up in Las Vegas where her Mystics teammates Elena Delle Donne and Kristi Toliver took the Western Conference to a narrow 126-129 defeat.

Cloud, 27, was not at the All-Star game herself, but Instagram stories show she proposed in Martin County, Fla., after Ocasio’s team was scheduled to compete that day against the Beijing Eagles. The softball game was postponed a day due to rain, but the weather didn’t stop Cloud’s proposal.

Loving you is all that I know how to do.

As the Chicago Tribune reported last month, Ocasio, 22, was born on Long Island, N.Y. Her family moved to Florida when she was seven. There, she grew up to become a star pitcher for the University of Florida, helping the Gators win the 2015 NCAA Division I Softball Championship. Ocasio ranked in the top 10 in 10 pitching and hitting categories. Last year she was the 10th overall pick in the National Pro Fastpitch League College Draft and has been playing with the Chicago Bandits ever since. Follow her on Instagram by clicking here.

Cloud is a Pennsylvania native, a graduate of Saint Joseph’s College and two-time co-captain of the Hawks basketball team. According to the WNBA, she holds the single-season record for assists (243), set as a junior in 2013-14 and was ranked second nationally among active players in assists per game (6.22). She was drafted No. 15 overall by the Washington Mystics in the 2015 WNBA Draft, second round. Follow her on Instagram by clicking here.