Home Gay Life Am I good enough for my two boyfriends, who happen to be... 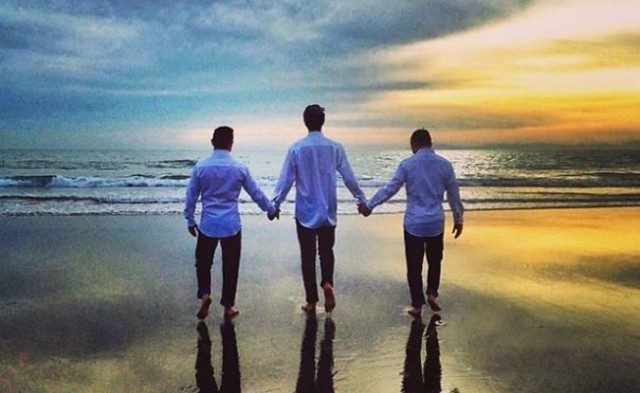 A U.K. man is having trouble being the third wheel in a relationship, so he’s seeking advice from Dannii Cohen at The Gay UK.

“I’m going out with two husbands,” Tony from Portsmouth writes. “I’m worried that I’m going to be dumped and that I’m not good enough for these two guys I’m seeing.”

Tony explains that his boyfriends have been together for six years and are civil partners.

“As a thruple we’ve been together for a year and recently they decided to make our three-way relationship closed,” he explains. In other words: “Just the three of us.”

Tony says things are “great” and he feels “really happy about that.” But there’s still something bothering him.

“I’m worried that they’ll get bored of me and want to move on without me,” he confesses. “I guess I just feel a little left out on my own. I don’t live with them and although I don’t necessarily want that, I do feel on the outside.”

He wonders: “What should I do not to feel on the outside and what do I do if they decide to open up the relationship again–or move on without me?”

In his response, Dannii doesn’t hold back any of the tough love.

“What I am going to tell you might not be what you want to hear, but understand this: I only have your best interests at heart,” he writes. “Even though these men might be nice to you and you probably feel good being part of this thruple, are you sure you want this forever? You say it yourself: they might move on or get bored of it. You are at the mercy of their whims.”

Dannii goes on to say that Tony is in a vulnerable position.

“Where the relationship is concerned they have all the power: years of being together and a civil partnership,” he explains. “The fact that you don’t live with them gives you even less claim on anything concerning emotional ties.”

“It also sounds as if you are not in love with either of them, but are scared of being alone,” Dannii says. “If you feel any doubts maybe it is best to leave now and find a single person you can connect with.”

“You deserve better,” he concludes, “and it’s out there for you.”