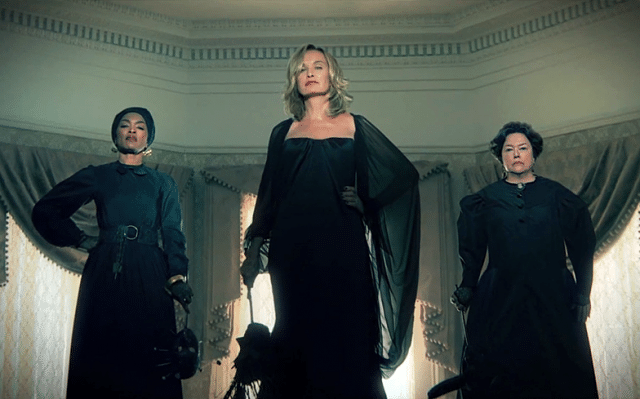 Another major American Horror Story star has confirmed they’re not returning for 1984.

Sarah Paulson, who has appeared on the critically-acclaimed horror series since its first season Murder House, will not appear for its upcoming ninth instalment, according to sources at Variety.

The American actress has received widespread praise for her work on the show, garnering five Emmy Award nominations (with no win – can you believe?) and two wins at the Critics Choice Television Awards.

She follows AHS veteran Evan Peters, who is also sitting this season out, and Billy on the Street star Billy Eichner, who had significant roles in the seventh (Cult) and eighth season (Apocalypse).

AHS fans were quick to slam the upcoming season for not featuring Sarah or Evan on Twitter (because it’s somehow Ryan Murphy’s fault), with some going as far to say they weren’t going to tune in.

“Sarah Paulson is leaving AHS… well it’s over,” said one fan while another wrote, “So you’re telling me there’s no Evan Peters, no Jessica Lange and now no Sarah Paulson in the new season of AHS?”

See all the reactions below.

What we do know is that previous cast member Emma Roberts will be back alongside Olympic freeskier Gus Kenworthy, who will be making his acting debut as Emma’s on-screen boyfriend.

Evan Peters, who’s starred in every season of the show since 2011, told GQ earlier this year that he wanted to take a “sabbatical” from AHS to focus on other endeavours because the series had taken an emotional toll on his mental health.