Home Gay Life Analysis: How well did Von der Leyen do in her pitch for... 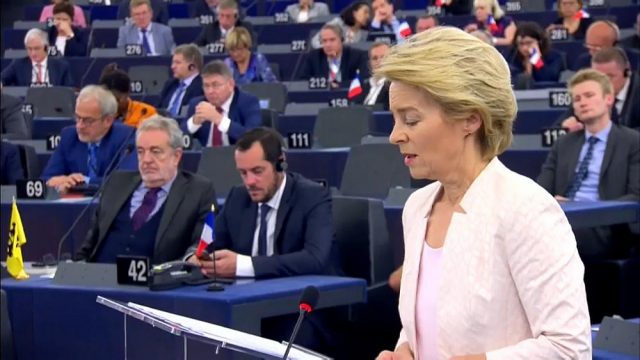 Ursula von der Leyen has been making a final pitch to MEPs to convince them to approve her as next European Commission president in a vote later on Tuesday.

You can watch analysis of her speech by Euronews’ political editor Darren McCaffrey in the video player, above.

In her speech she promoted multilateralism, fair trade, and rules-based order, saying it was the “European way”.

Von der Leyen also spoke about what she called Europe’s duty to save lives in the Mediterranean, citing the 17,000 people drowned there in the last five years.

She promised a new migration pact to tackle the problem, as well as a carbon-neutral Europe by 2050, and a boost for unity across the continent.

“We want multilateralism, we want fair trade, and we defend rules-based order because we know it is better for all of us. We have to do it the European way” she said, adding: “But if we are to go down the European path, we must first re-discover our unity. If we are united from the inside, nobody will divide us from the outside.”

She also spoke about the drive for Europe to reduce its carbon emissions, saying that keeping our planet healthy is a pressing challenge.

“This is the greatest responsibility and opportunity of our times,” she said. “I want Europe to become the first carbon-neutral continent in the world by the year 2050.”

She told MEPs the current targets of reducing the EU’s carbon emissions by 40% by 2030 is not enough.

“We need to go further… we need to reduce by 50% if not 55% by 2030, the European Union will lead international negotiations, the world must move together.”

To make this happen Von der Leyer says she will put together a new green deal in the EU, promising to set new carbon emissions targets in EU law.