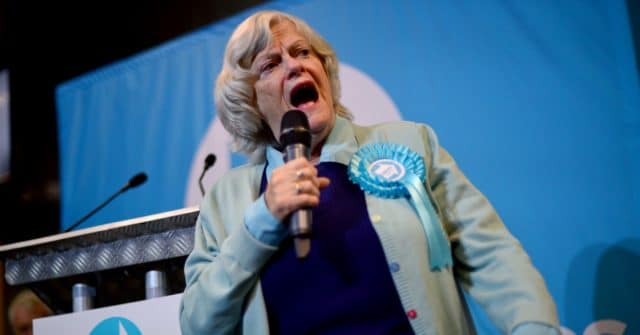 As the European election results roll in, the Brexit Party’s Ann Widdecombe has made a surprise return to the frontline of British politics.

Widdecombe has been elected as the MEP for the south west of England, nine years after retiring from parliament.

Her’s was one of a string of victories for the Brexit Party which has won 28 of the 64 seats declared so far, topping the polls in every region of England apart from London.

The former Big Brother contestant called the result a wake-up call for the Conservative government, which has been thrust into a leadership contest following the resignation of Prime Minister Theresa May.

“It’s very clear. there was only ever one reason for voting for the Brexit Party, and that is what the nation has done, big time,” Widdecombe said on Monday (May 27).

“What this does is send a very clear message to Westminster, again, that if they don’t sort out leave, at the next general election both the big parties are going to face carnage.

“We shouldn’t even be having these elections. These elections are a clear demonstration of the farce that has enveloped Westminster.

“I want a clean Brexit and that is where we have to put our pressure.”

The Brexit Party has won 33 percent of the vote across England and Wales, with Scotland and Ireland yet to declare.

The Liberal Democrats are currently in second place with 20 percent of the vote and 15 MEPs. Labour stands in third place with 10 MEPs and a 14 percent share, with the Green Party on seven MEPs (12 percent) and the Conservatives on just three MEPs (nine percent).

Widdecombe is notable for her staunch anti-LGBT stance.

During her time as an MP from 1987 until 2010, the former Conservative voted against LGBT rights repeatedly.

In recent years she has used her Daily Express column to espouse her far-right views, branding the acceptance of transgender people “lunacy” and backing businesses who refuse to serve gay customers.

In January 2018, Widdecombe competed in Celebrity Big Brother where she regularly clashed with other, more liberal contestants over her views.

She had several memorable conversations with eventual winner Courtney Act, who won praise for their delicate and frank handling of LGBT issues.