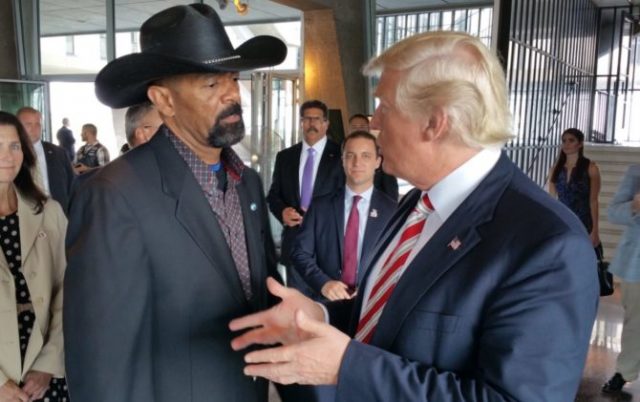 Just how bad is David Clarke, currently being considered for Donald Trump’s cabinet? Oh, boy, he’s really, really bad. Like, even bad by the standards of The Donald administration, and that’s saying something considering the monsters he’s handing power over to.

Here are a few of Clarke’s greatest hits:

After a gunman attacked the Pulse nightclub in the worst American mass shooting, Clarke said that gun control was a “distraction” from more important issues like Hillary Clinton‘s emails. Yup, the mass murder of dozens of queer people: a “distraction.”

He also called trans people “freakish,” so thanks for that, and said “they’re shoving it down our throats.” He probably means that metaphorically, which is a shame.

He approvingly quoted from an activist who says that the parents of trans people should be thrown in jail — sure, that’ll be great for the kids — and calls acceptance of gender variance a form of “madness.”

Let’s give this guy the benefit of the doubt and say that he’s just woefully misinformed, that he’s been lied to his whole life, and that he’s been fed a diet of falsehoods that he’s simply never questioned. If that’s the case — and we’re not saying it is, he could just be straight-up evil — then it might be ok to have a little compassion for the poor misguided man.

But that doesn’t mean Donald has to appoint him as head of the Department of Homeland Security, good grief. Call your congress member today and insist that they oppose this dangerous man’s appointment.