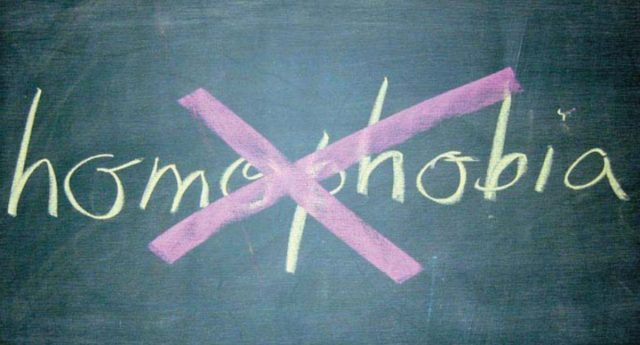 A gay, married couple had the front door of their apartment defaced on Friday with homophobic slurs.

“Fags” was written in marker pen across the door of their shared apartment in Okemos, Michigan.

A neighbour of the couple found the vandalism in the morning and reported it to the apartment block. When the tenants were made aware of the slurs, maintenance staff had already begun work to remove it.

The couple Nikki Schartzer and Katie Dietrich, have been married for over a year and they live with their gender fluid roommate, Pam Philo.

“The fact that it happened to me and two people I love dearly is really upsetting and disappointing,” Philo said.

“It’s really disheartening,” Dietrich said. “I’d like to think people are better than this kind of behaviour.”

The roommates reported the incident to local police, however the apartment complex has no cameras positioned that might have recorded the act so it’s unclear who the vandal is.

The anti-LGBT insult comes after a spike in hate crimes in America following the announcement that Donald Trump will be the next President elect.

Trump’s campaign was littered with homophobic, misogynist and racist rhetoric that offended scores of communities including Muslims, Latinos, women and the disabled.

A gay couple in Utah have had their car vandalised with homophobic slurs including “faggot” and “die homo.”

Safety pins are being worn by American citizens across the continent to show solidarity with victims of homophobic, racist and religious abuse.