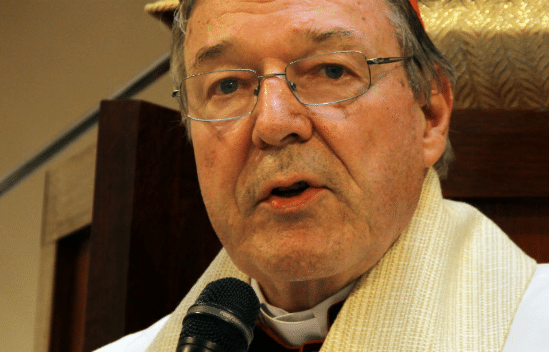 Up until his arrest and trial, he was the Roman Catholic Church’s most senior figure within Australia. He also had a leading role as the Vatican’s treasurer.

The church suspended him as cardinal in June 2017 and removed him from office in December 2018. His term as treasurer ended on Sunday.

A jury found Pell guilty at a trial in Melbourne in December. However, legal restrictions imposed on the media stopped much of the world’s press from naming him.

A judge lifted those legal restrictions today ahead of his sentencing.

The court found him guilty of abusing two choirboys in Melbourne in 1996. One of his victims has since killed himself.

Trial and conviction of George Pell

Pell denied the charges. He faces sentencing on Wednesday. He continues to protest his innocence and has lodged an appeal against his convictions.

Pell’s conviction makes him the senior most Catholic official convicted of a sexual offence. News of his conviction comes just days after Pope Francis held a Vatican summit on the problem of sexual abuse by church officials.

Pope speaks out against sexual abuse by priests

On Sunday, the Pope gave a speech slamming abuse by priests and other church officials.

He noted the worldwide problem of child sex abuse, which often takes place within the family home. However, he also spoke of it within the church.

‘The brutality of this worldwide phenomenon becomes all the more grave and scandalous in the Church, for it is utterly incompatible with her moral authority and ethical credibility.

‘Consecrated persons, chosen by God to guide souls to salvation, let themselves be dominated by their human frailty or sickness and thus become tools of Satan. In abuse, we see the hand of the evil that does not spare even the innocence of children.

‘No explanations suffice for these abuses involving children.’

Pell became Cardinal of Australia in 2014. During his time in the role he spoke out frequently against LGBTI rights and same-sex marriage.

The Australian public voted to approve same-sex marriage legislation in a hugely divisive public vote in 2017.

In the run-up to the vote, Pell was one of the leading figures to oppose the legislation. In 2015, he criticized Ireland’s vote for marriage equality and the US Supreme Court ruling on same-sex marriage.

As an Archbishop in 2012, in submissions to the Australian Senate on the issue of marriage equality, Pell wrote that opposite-sex marriage was sacrosanct.

‘By contrast,’ he said, ‘although the community formed by a homosexual couple may involve genuine caring, affection and commitment to one another, it is not an inherently procreative community, because their sexual relationship is not designed to create children.’