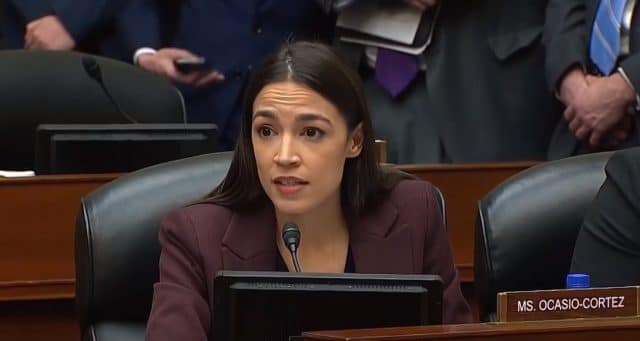 During a hearing of the House Oversight and Reform Committee, the freshman congresswoman asked O’Day why his company charges nearly $2,000 for a drug that consumers in Australia can buy for just $8.

Not satisfied with his answer, Ocasio-Cortez pointed out that the drug was originally discovered to be effective in preventing HIV infections by a federal lab in Atlanta — and she said that the U.S. government had patented the drug’s use for such treatments.

“I think it’s important that we notice here that we the public, we the people, developed this drug, we paid for this drug, we led and developed all of the grounding patents to create PrEP, and then that patent has been privatized despite the fact that the patent is owned by the public,” she said.

She continued: “We refuse to enforce it. There is no reason this should be $2,000 a month. People are dying because of it. And there’s no enforceable reason for it. We own the core intellectual property for it and as a result people are dying. For no reason.”

.@AOC to Gilead CEO: The list price [for Truvada for PrEP] is almost $2,000 in the US. Why is it $8 in Australia? pic.twitter.com/kPnMQSZE0G

O’Day, however, argued that the patents the government has related to Truvada and HIV prevention are invalid.

The CEO had told the committee earlier: “Our well-supported view is that the U.S. government does not hold valid patents on the use of Truvada for pre-exposure prophylaxis (‘PrEP’), nor does it hold any patent for Truvada itself.”

:The panel called the hearing after The Washington Post reported in March that the government had opted not to file an infringement suit to enforce a 2015 patent on Truvada from the Centers for Disease Control and Prevention. The use of the drug to prevent HIV infection was discovered in federal labs in Atlanta, according to the government. Since the article appeared, members of Congress have written letters to the Department of Health and Human Services demanding to know why the patent has not been enforced. The Justice Department has opened a review of the patent, which would be an initial step toward more aggressive enforcement.